The world knows Dale Chihuly as a pioneering glass artist. But that is just one facet of his life. Over the years, Chihuly has developed a host of innovative techniques to achieve his artistic vision. He started drawing as an interior design student at university and has continued to explore its versatile medium ever since then. Working on paper, Chihuly explores colour and depth, blurring the boundaries between painting, drawing and glass work.

Following the Chihuly exhibition last year of Dale Chihuly’s prints and drawings at Sims Reed Gallery, we are excited to present a selection of the artist’s unique works on paper created with liquid acrylics, made between 1994 to 2014.

For Chihuly, drawing has always been an integral part of his practice, whether as a springboard for his sculptural work in glass, or as works in their own right. Drawing is a process of discovery for him and are extensions of his sculptures. In his mind, the two mediums are intertwined: “Drawing is a fluid process, as glassblowing is a fluid process.” Without any preconceived intentions, Chihuly’s images grow organically from the process of drawing itself – similarly to how three-dimensional forms take shape spontaneously out of the physical qualities of molten glass. His drawings capture the fluid and expressive spontaneity of the creative gesture. 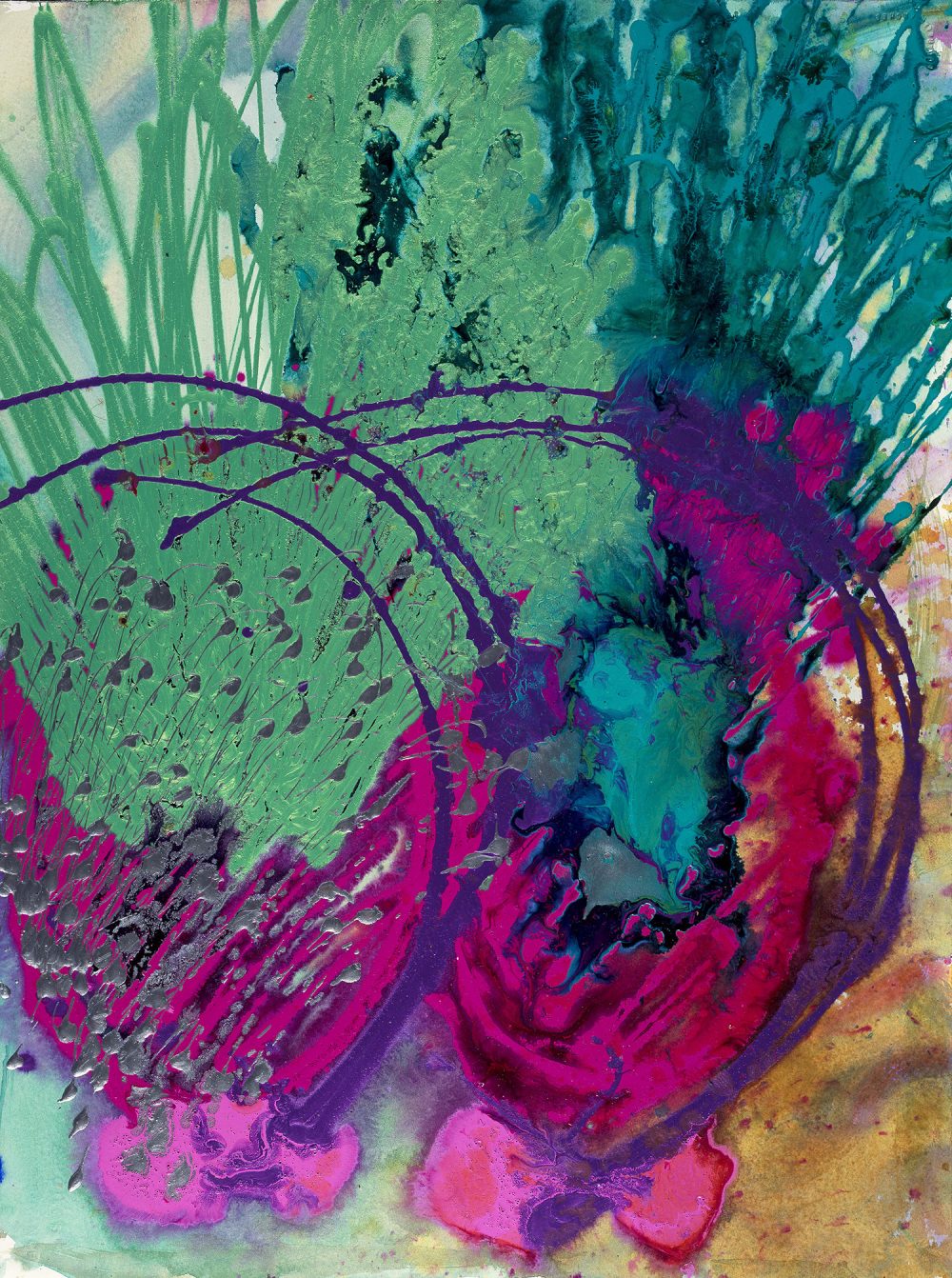 The earliest work in the exhibition – Venetian Drawing (1994) – shows Chihuly’s roots in drawing. As a design student, he was trained to make meticulous pencil-and-wash renderings. When he began glassblowing in about 1966, he had a hiatus from drawing, but after 1976, when he lost the sight in his left eye due to a car accident, it became a useful tool and means of communication for his visions in translating glassblowing projects. However, while the drawings began to depict forms that related to his glass works, they were no longer studies specially for them, but evolved into independent expressions of some of the same formal and conceptual concerns.

In Venetian Drawing (1994), we see how Chihuly’s drawings took on a life of their own, leading Chihuly’s vision on, rather than merely communicating it. The work shows a more abstract and wilder departure from the Venetian Drawings of the 1980s, with bold, painterly gestures and splashes used to indicate the vertical spray at the top of the vessel. The use of colour almost metamorphosises the basic vessel form and creates a shimmering movement.

“If you look at the history of my drawings, you’ll see that they started off in the late ‘70’s with graphite, charcoal, simple things to show the glassblowers how to work. And then they got more complicated. I started working with color more. I started working with acrylics. And the drawings got wilder, and they got larger…became more abstract. So, it’s very simple to look at the progression of the drawings – probably easier than to look at the progression of my glass work.” – Chihuly 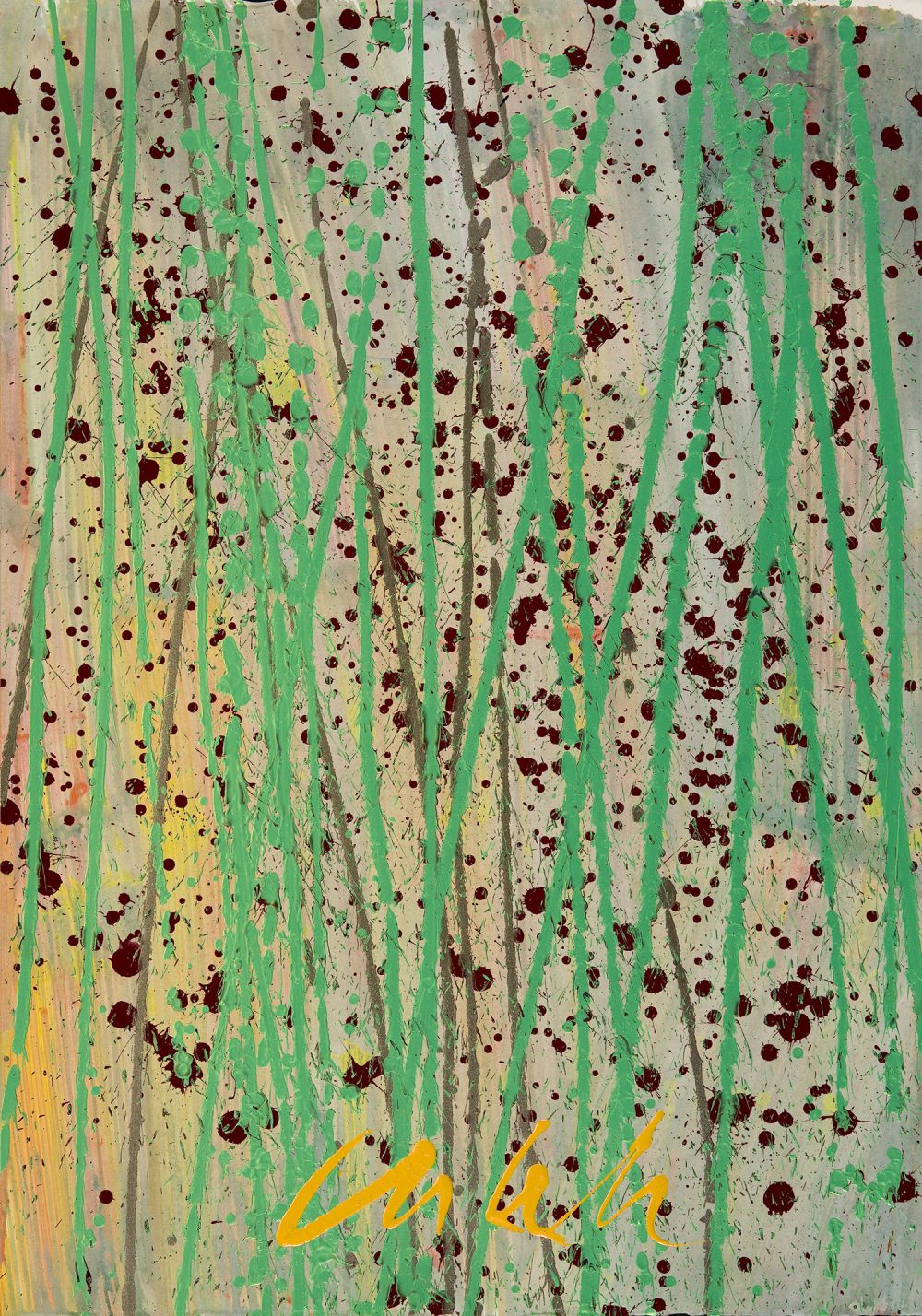 “I began the blow with the idea of replicating the Italian Art Deco vases that I had spotted in Venice. I started with a simple drawing of a classical Etruscan form with several handles. After Lino finished the first piece I quickly made another drawing that was a little more complicated, involving additional work…. The series started a drastic change from rather refined classical shapes to unconventional forms: handles changed to knots, prunts became claws, colors went from subtle to bright, and big leaves and feathers appeared.” – Chihuly.” 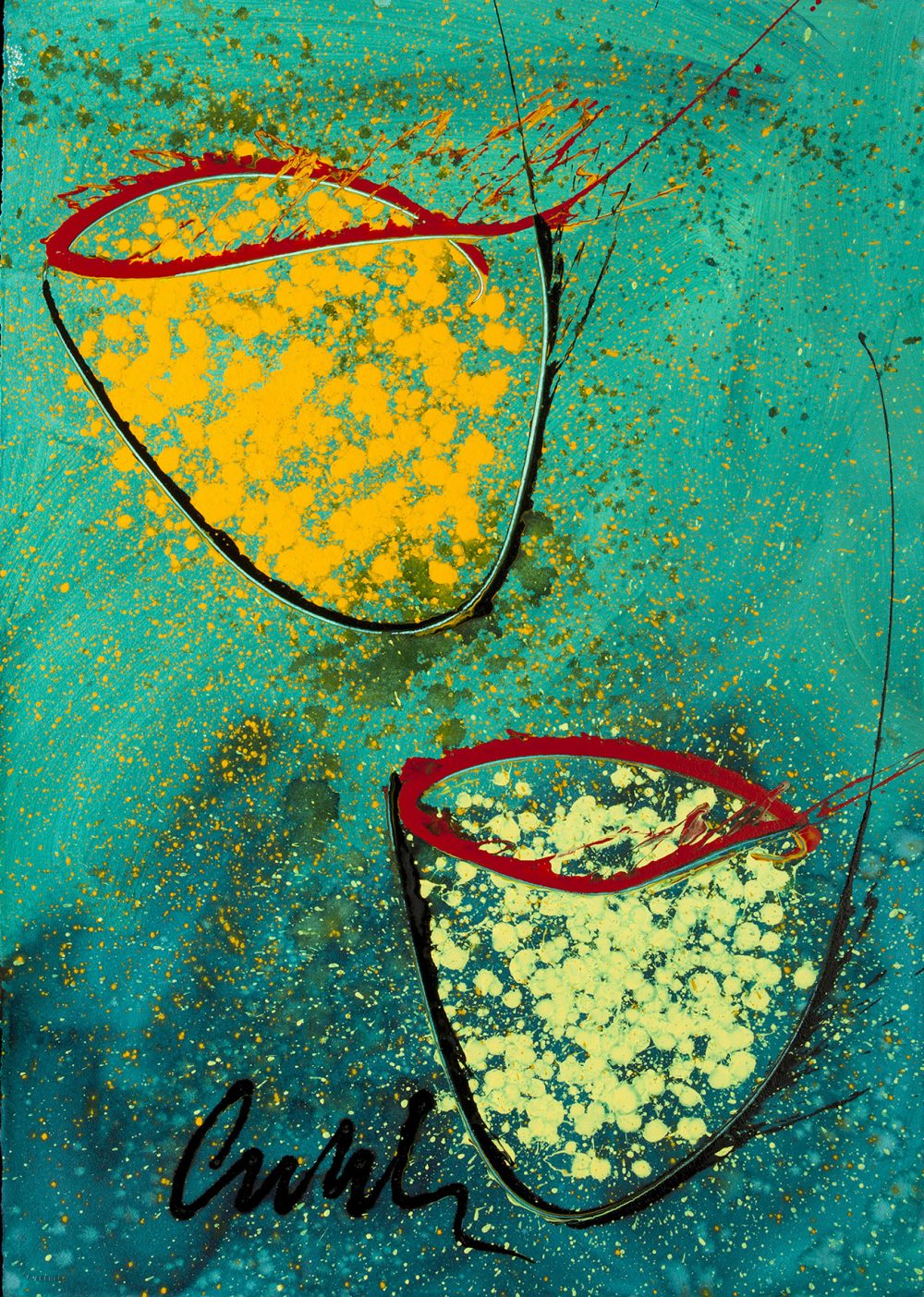 When drawing is deeply connected to glassblowing, Chihuly often draws directly in the Hotshop – the studio where his glass works are made. This process joins his drawing activity to the communal activity of the glass-making in progress. There is a synergy between the dynamism of the drawings and the glassmaking, which flows into one another, creating a circular process. 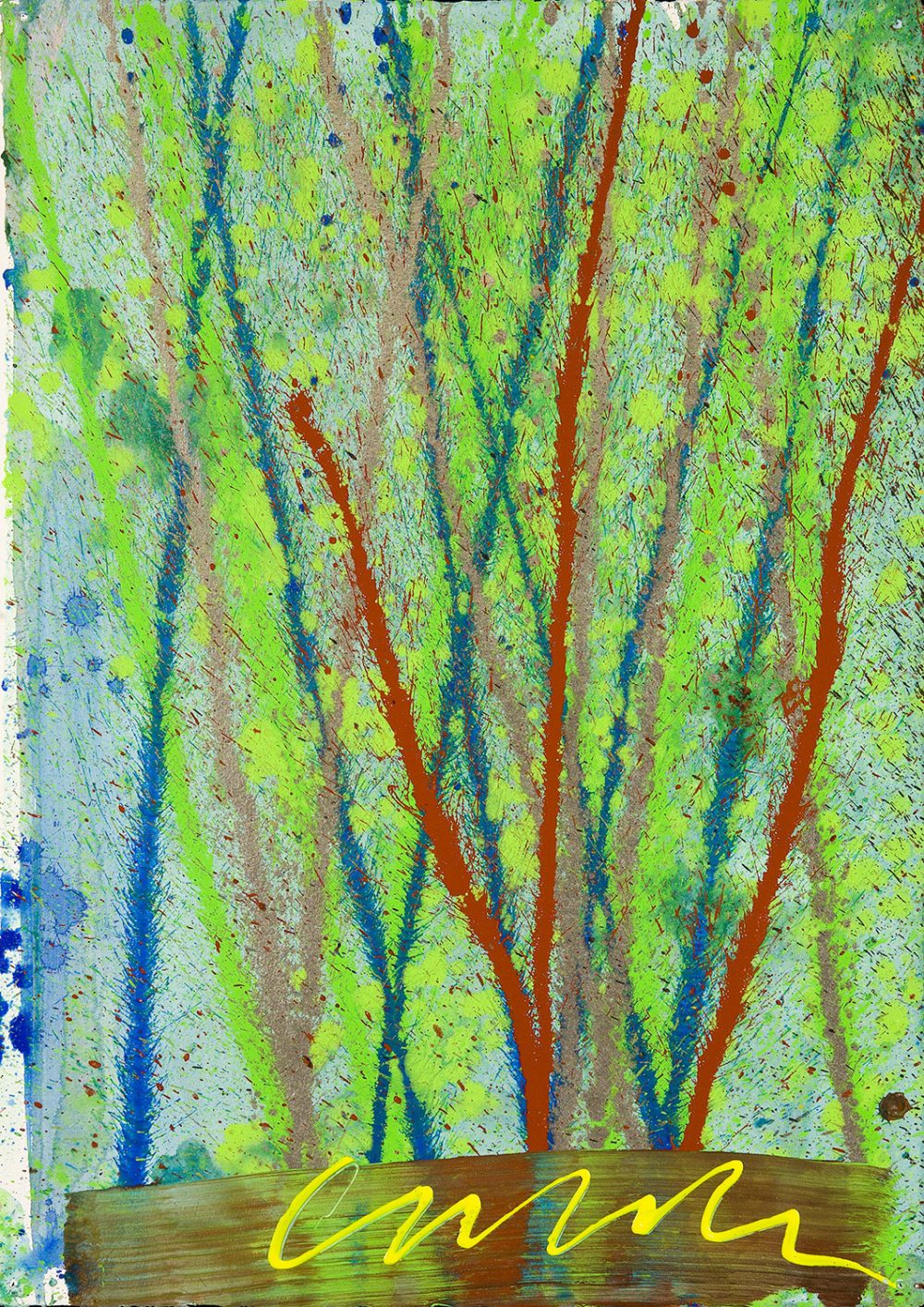 Chihuly’s technique involves creating layers of acrylic paint, which coagulate on the surface of the paper to react with previous and subsequent layers – creating ‘blooms’ like the effect of oxidation on metal. After 1989, Chihuly started using  liquid acrylic paints. The ease of them being in plastic squeeze bottles enabled him to develop a repertoire of actions using this paint: from squeezing to dribbling it in long, threadlike strands directly from the bottle. The liquid paint pools and puddles, explodes in splashes of droplets from a height and shoots across the sheet with explosive force.

“The drawings have to do with releasing energy.” – Chihuly 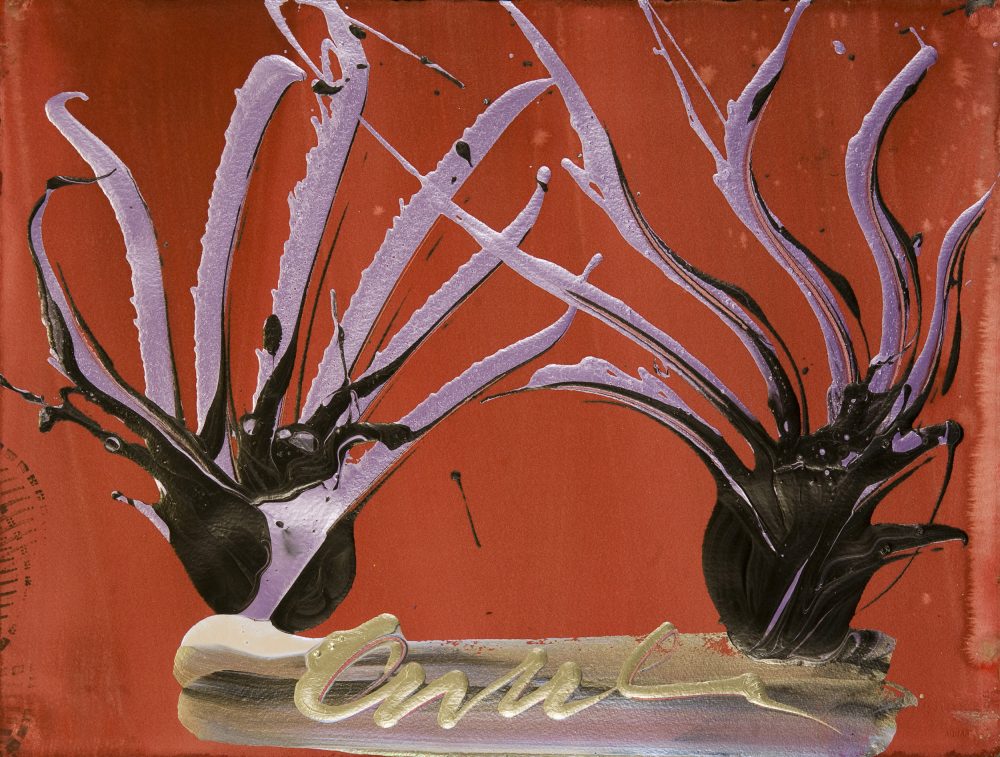 On the lower left hand side of the above Ikebana Drawing (2008), one can see Chihuly’s foot prints. Chihuly works intuitively on multiple paintings simultaneously and mostly on floor level. This imprint is a snapshot of his unique and dynamic painting process, as he rapidly moves with his painting assistants from one surface to another.

“My work, to this day, revolves around a simple set of circumstances: fire, molten glass, human breath, spontaneity, centrifugal force, and gravity.” – Chihuly 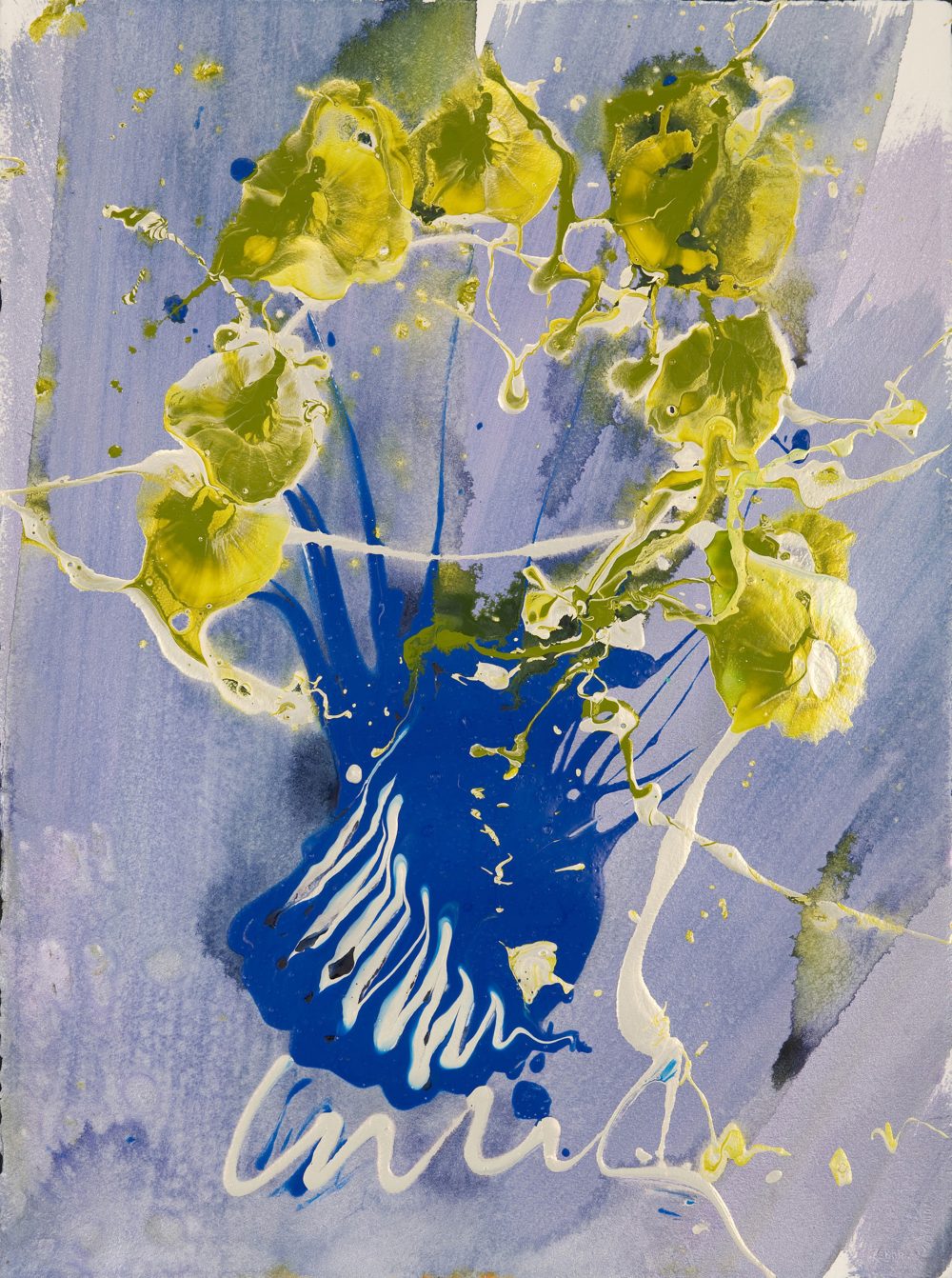 The light wash of background on this Ikebana Drawing is resminiscent of watercolour. Chihuly created this effect by mixing the acrylic paints with water to lighten the coverage.  The flower on the stems are full of expressive energy, realised with direct use of the liquid acrylic bottle without the intermediary of a brush. 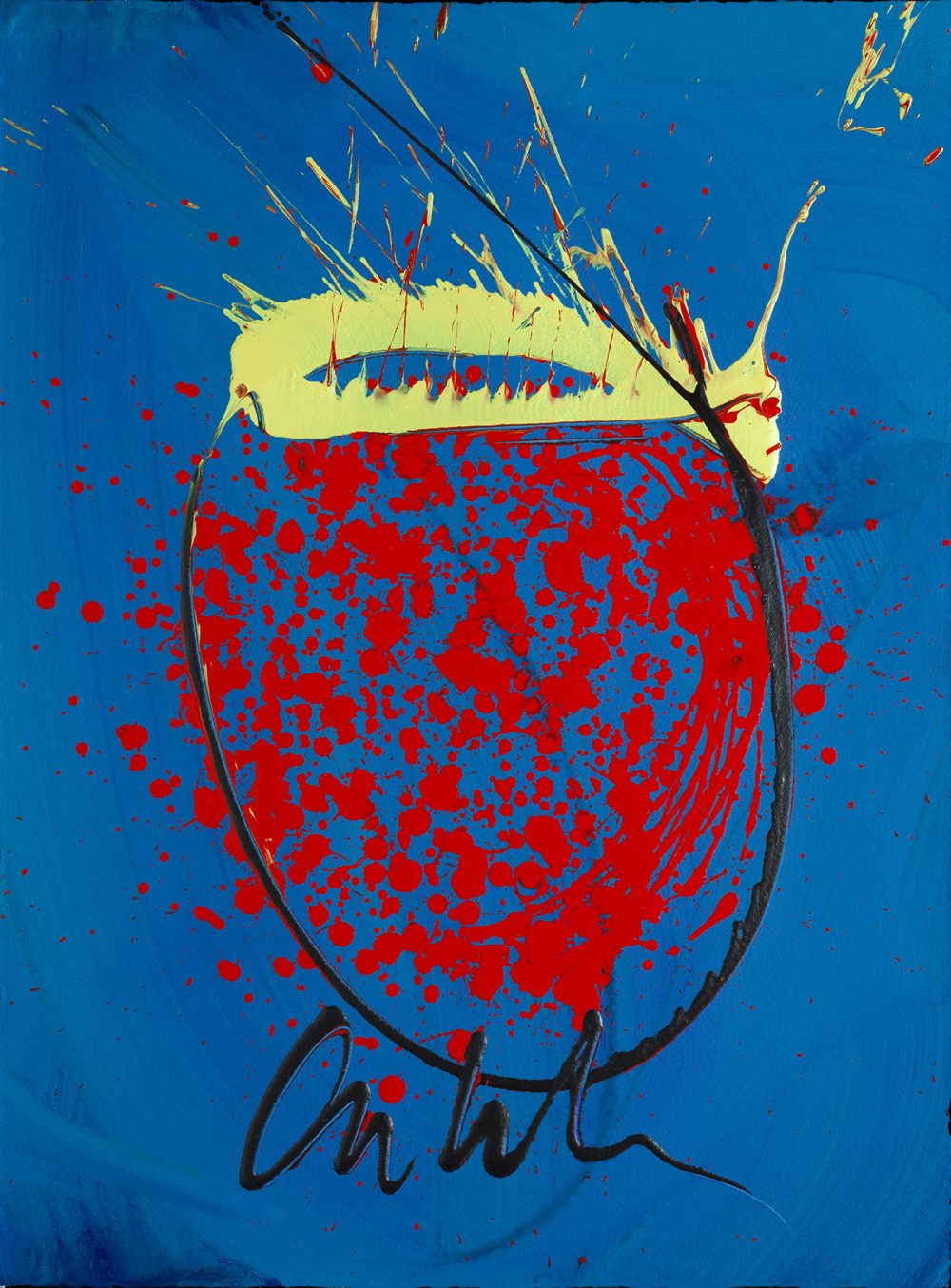 Chihuly often returns to similar motifs in his drawings, each time creating variations and finding something new from the experience of revisiting a familiar form. For example, drawings with the Basket Drawing title recall the glass series of the same name with their spherical forms. While partaking of this serial character, they are also unique works. While the ‘design’ has already been established, the ‘action’ of the process is always new and in the moment, re-created afresh, like an actor’s performance. It is the process that, in turn, makes the image new again. 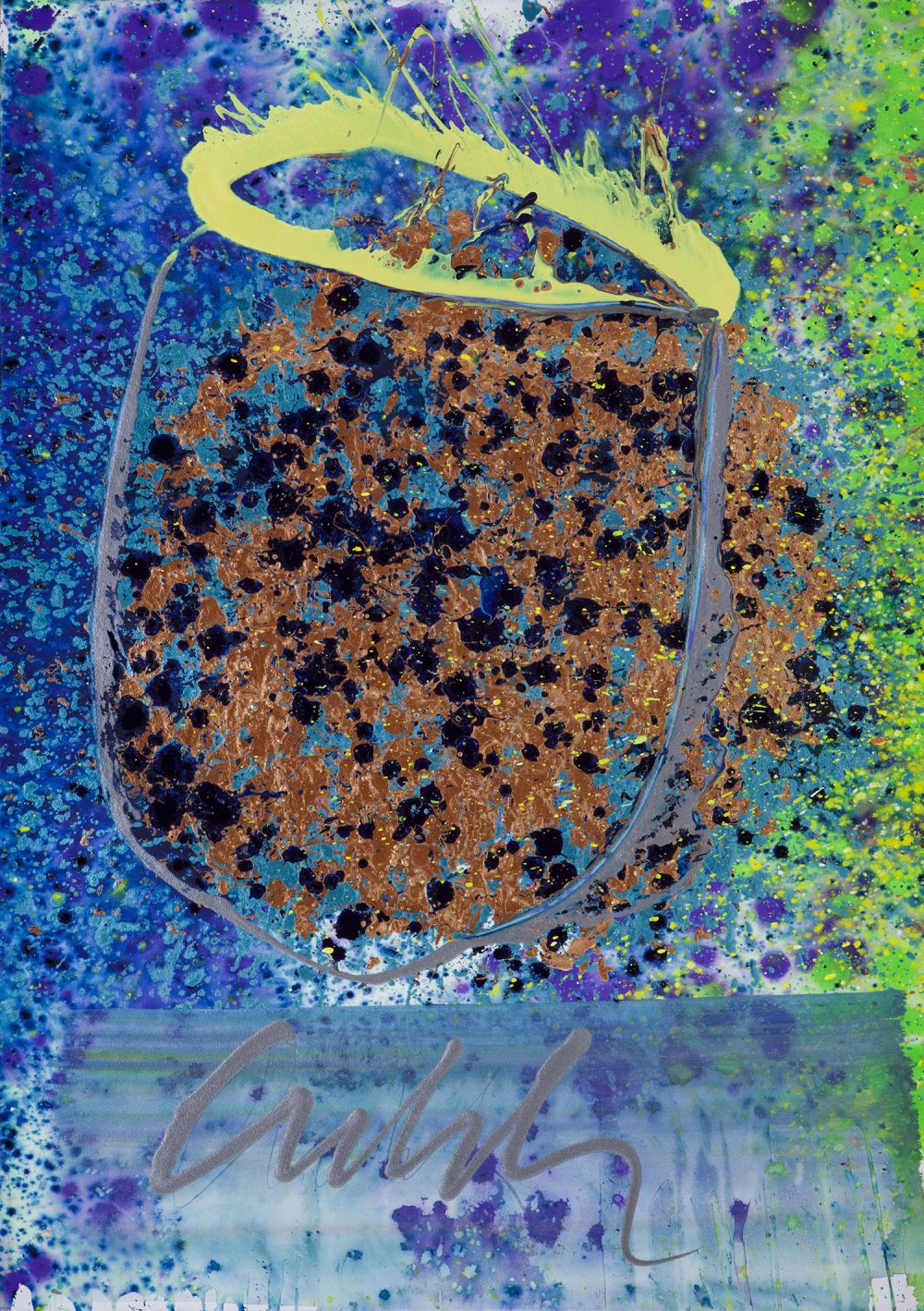 For Chihuly, colour is embodied and at one with the material of glass and its infinitely various possibility of forms. His drawings often seek to translate this, as though they are illuminated from within. 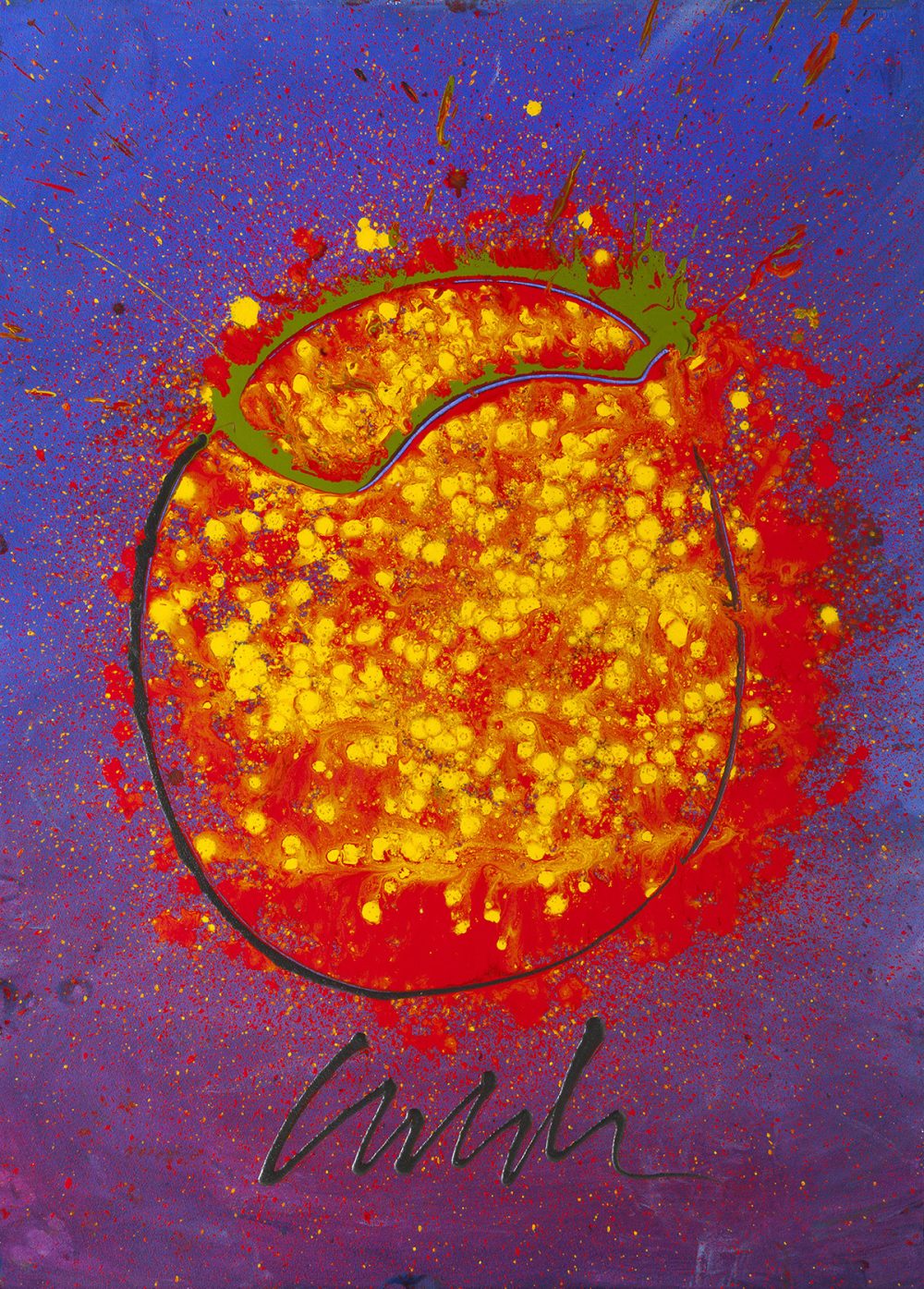 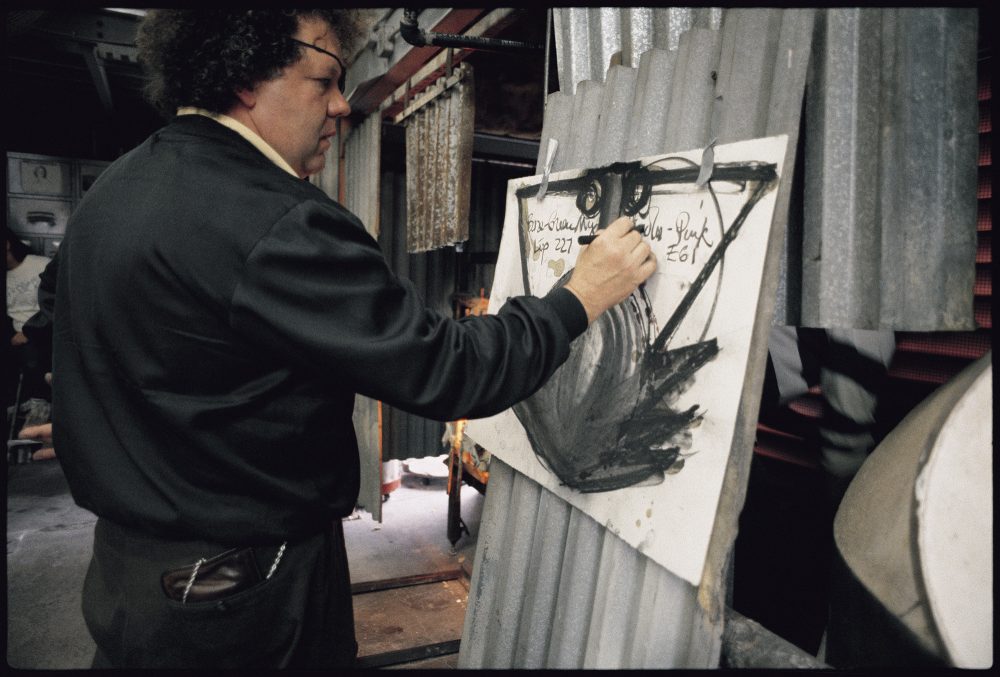 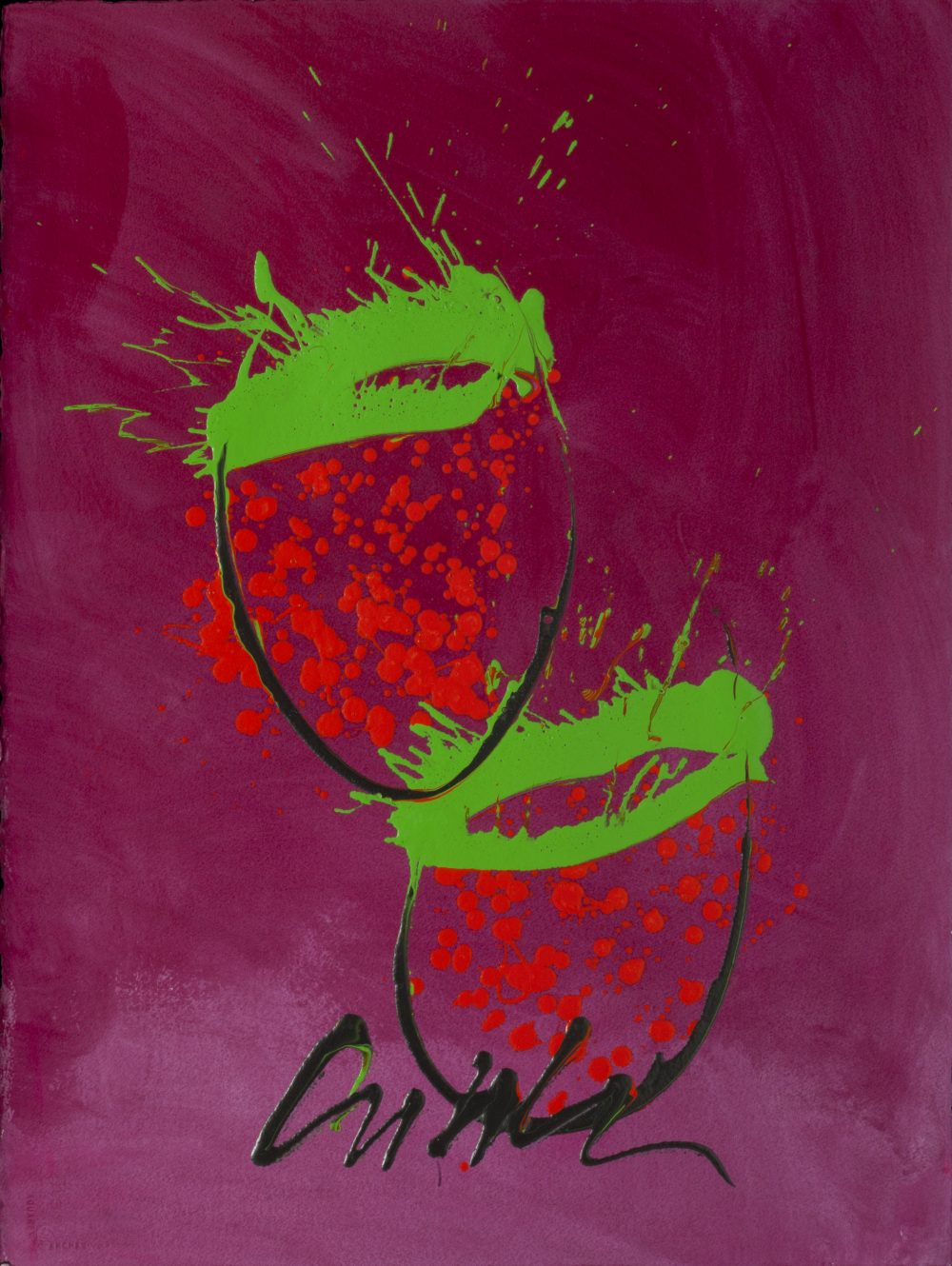 In 1968, after receiving a Fulbright Fellowship, he went to work at the Venini glass factory in Venice. There he observed the team approach to blowing glass, which is critical to the way he works today. In 1971, Chihuly co-founded Pilchuck Glass School in Washington State. With this international glass centre, Chihuly has led the avant-garde in the development of glass as a fine art.  His work is included in more than 200 museum collections worldwide. He has been the recipient of many awards, including two fellowships from the National Endowment for the Arts and thirteen honorary doctorates.

In 1999, Chihuly started an ambitious exhibition, Chihuly in the Light of Jerusalem; more than 1 million visitors attended the Tower of David Museum to view his installations. In 2001, the Victoria and Albert Museum in London curated the exhibition Chihuly at the V&A. His lifelong fascination for glasshouses has grown into a series of exhibitions within botanical settings. The Garden Cycle began in 2001 at the Garfield Park Conservatory, Chicago, and continued at several locations, among them the Royal Botanic Gardens, Kew, near London, in 2005 and 2019, and the New York Botanical Garden, Bronx, in 2006 and again in 2017.

Meanwhile, Chihuly has exhibited at other venues as well, including the de Young Museum, San Francisco, in 2008; the Museum of Fine Arts, Boston, in 2011; the Virginia Museum of Fine Arts, Richmond, in 2012; the Montreal Museum of Fine Arts, in 2013; the Royal Ontario Museum, Toronto, in 2016; the Crystal Bridges Museum of American Art, Bentonville, Arkansas, in 2017; and Groninger Museum, Groningen, the Netherlands, in 2018. Chihuly Garden and Glass, a major long-term exhibition, opened in Seattle in 2012. His first gallery exhibition of prints and drawings in Europe took place at Sims Reed Gallery in 2020.

References from:
‘The Drawings of Dale Chihuly: Gesture as Image’ from Chihuly Drawing by Nathan Kernan. Seattle. (Chihuly Workshop: 2003).

All artwork and images © 2021 Chihuly Studio. All Rights Reserved. 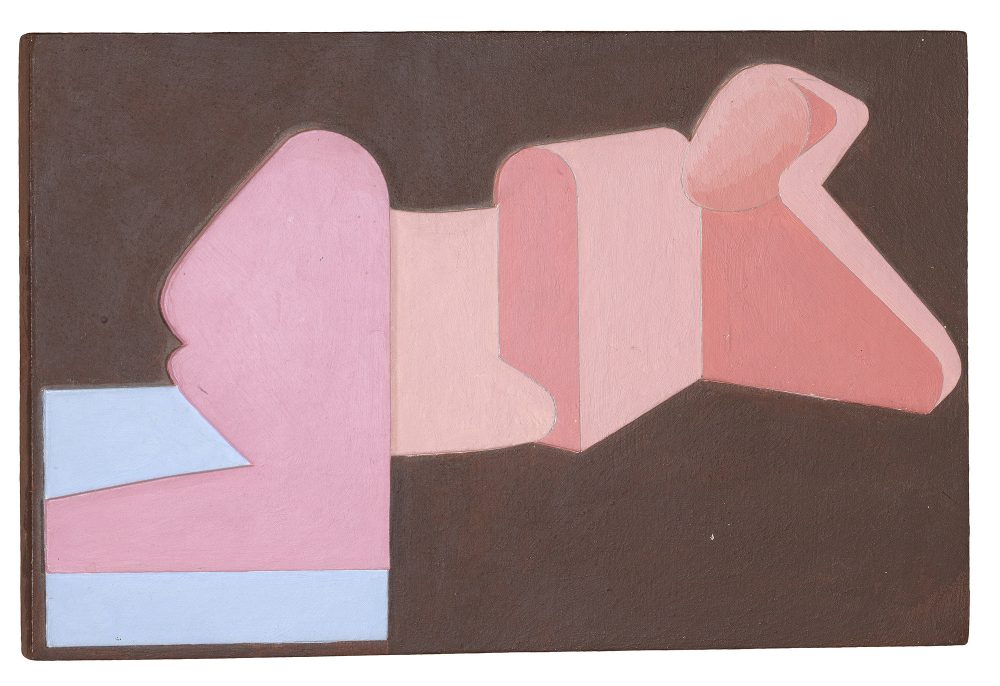 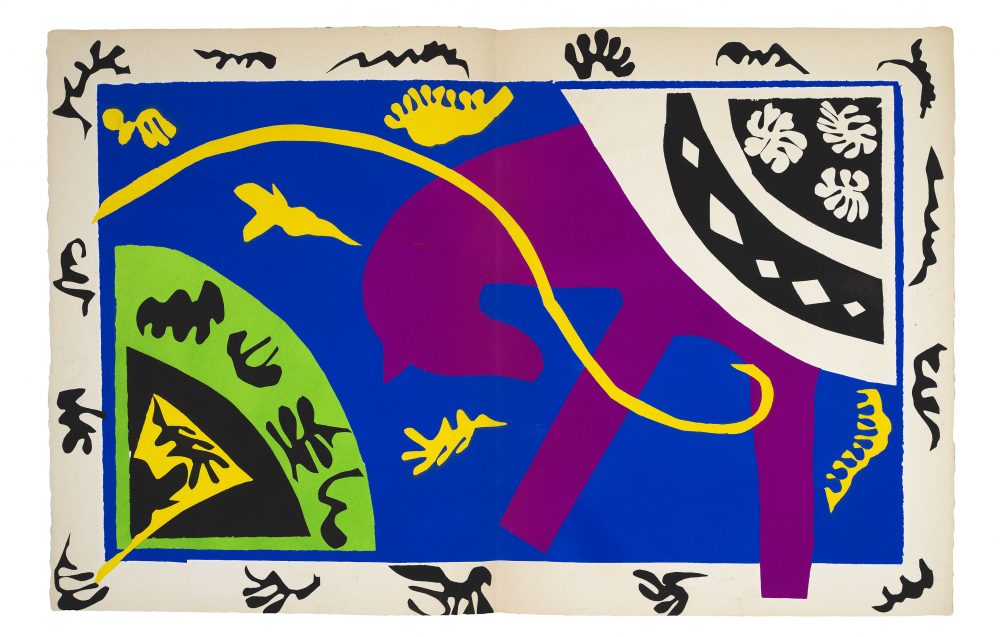 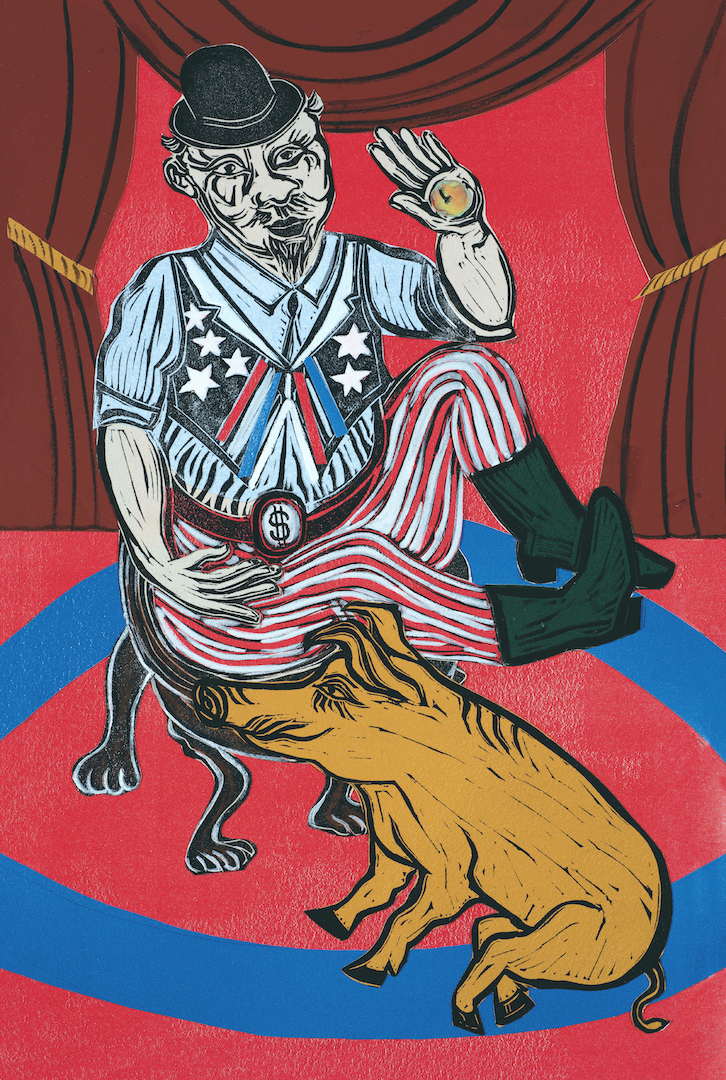 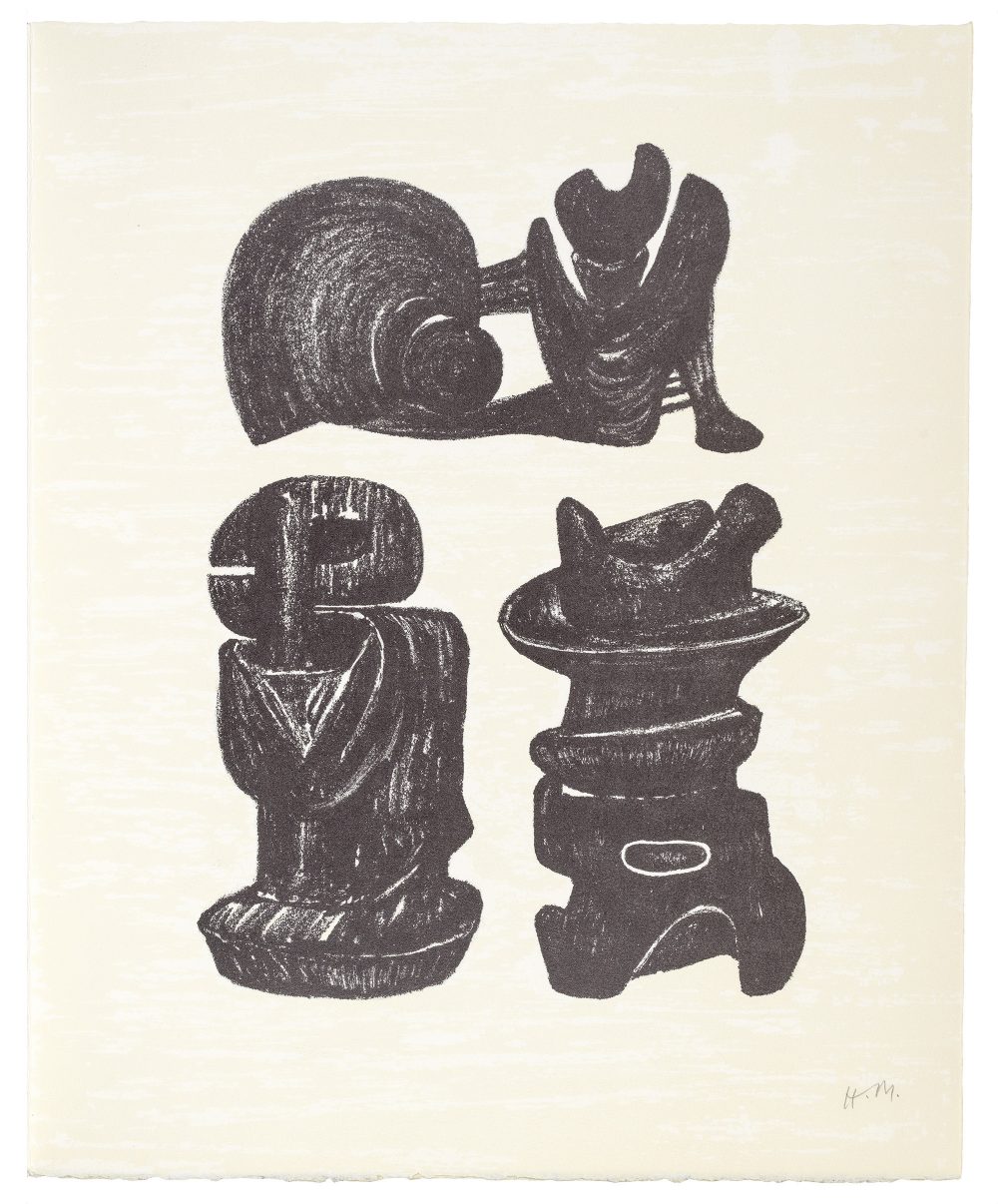 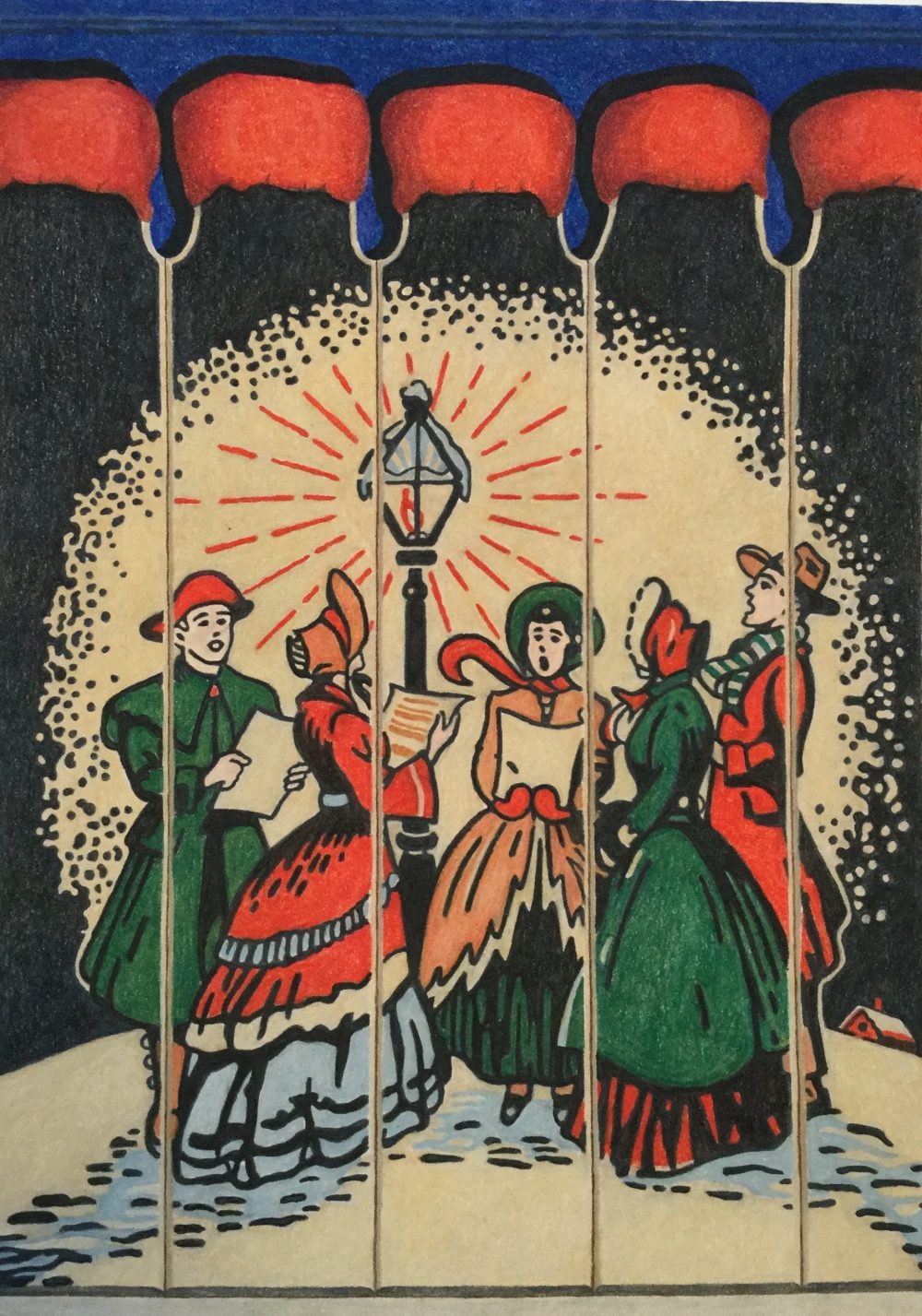 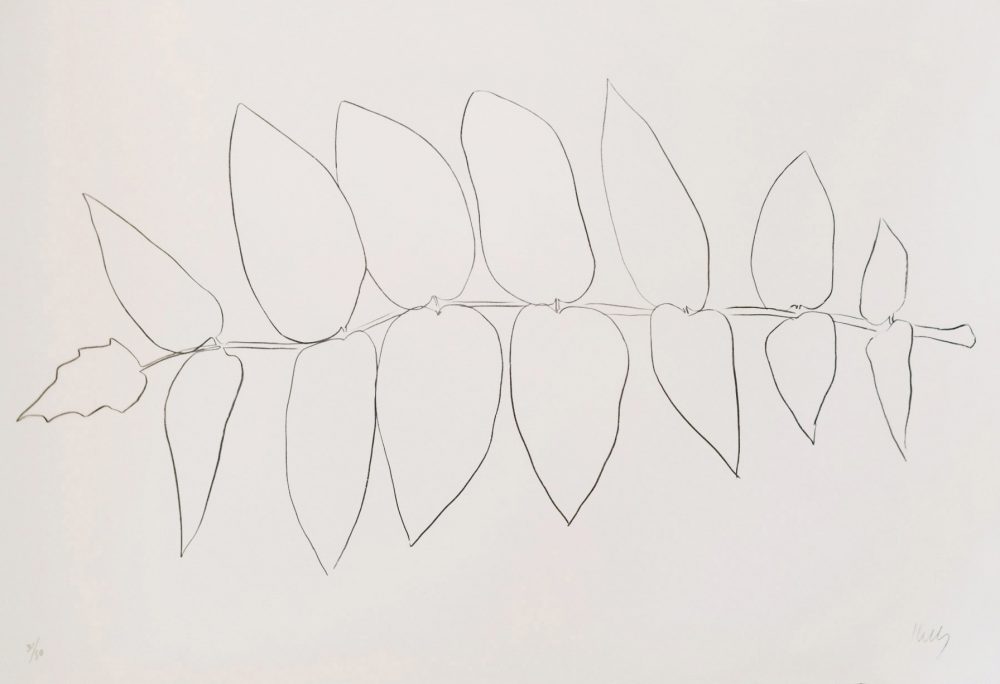 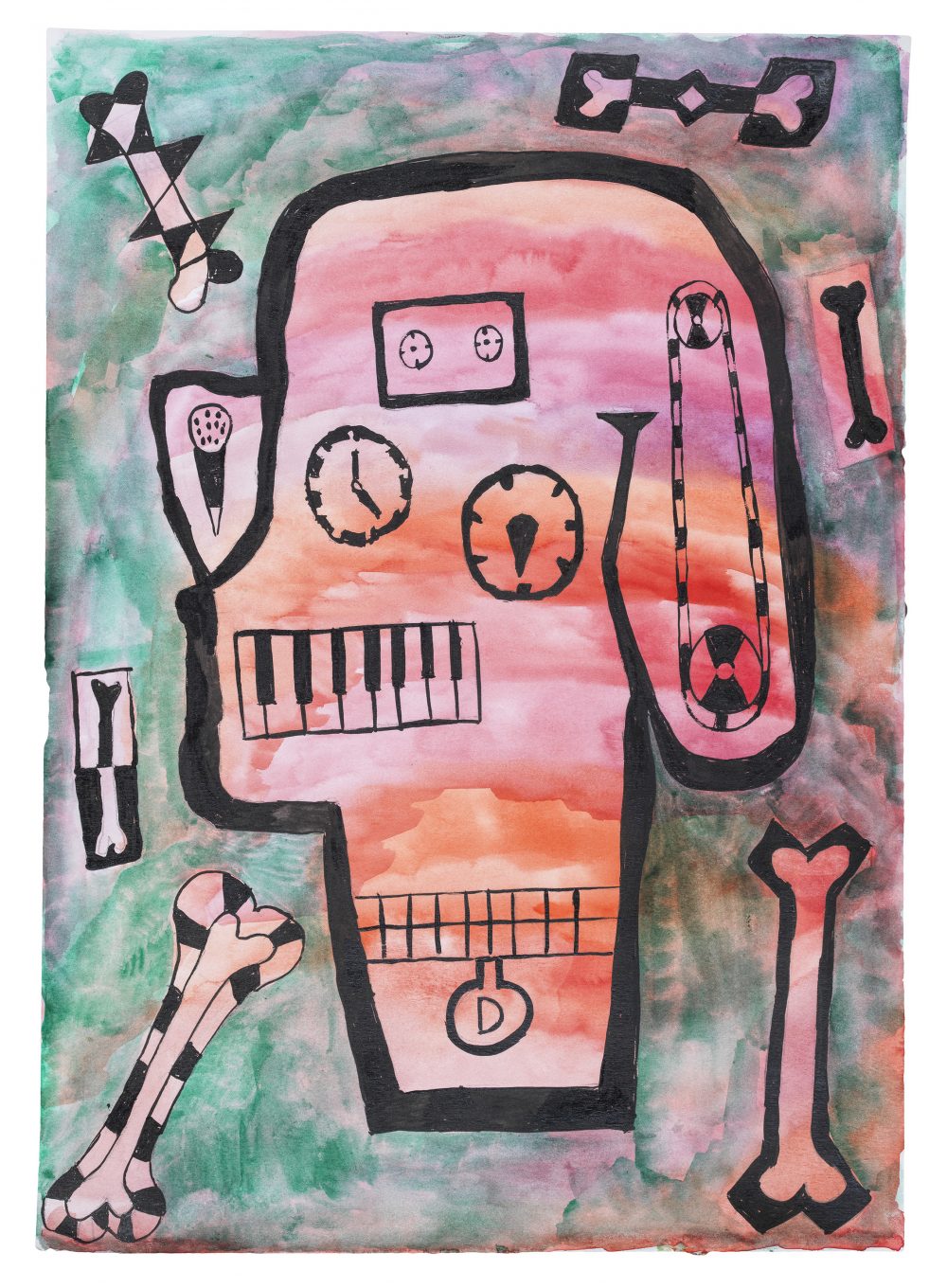 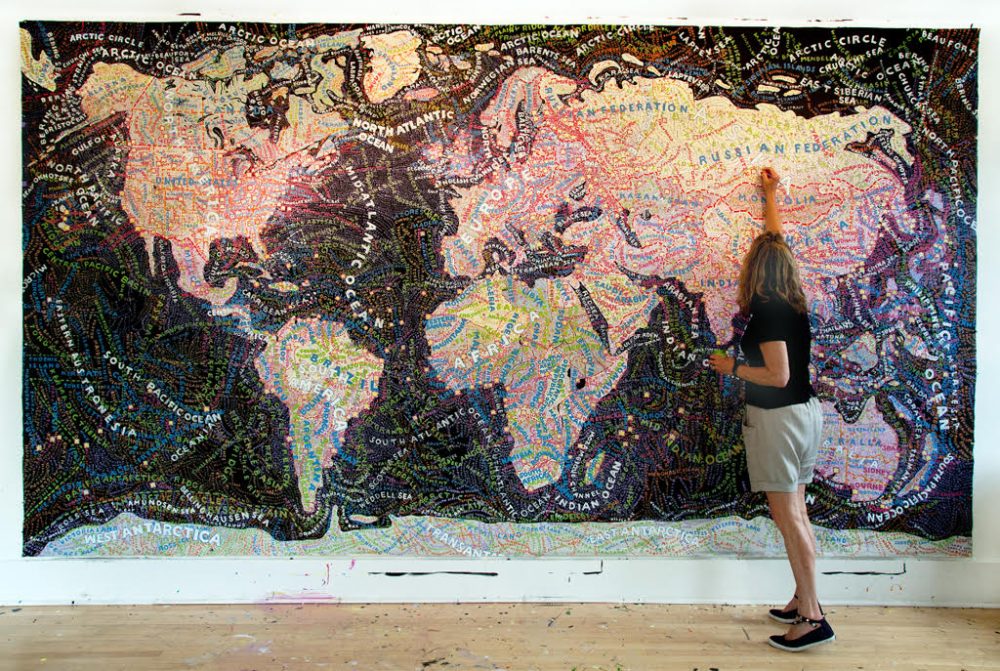 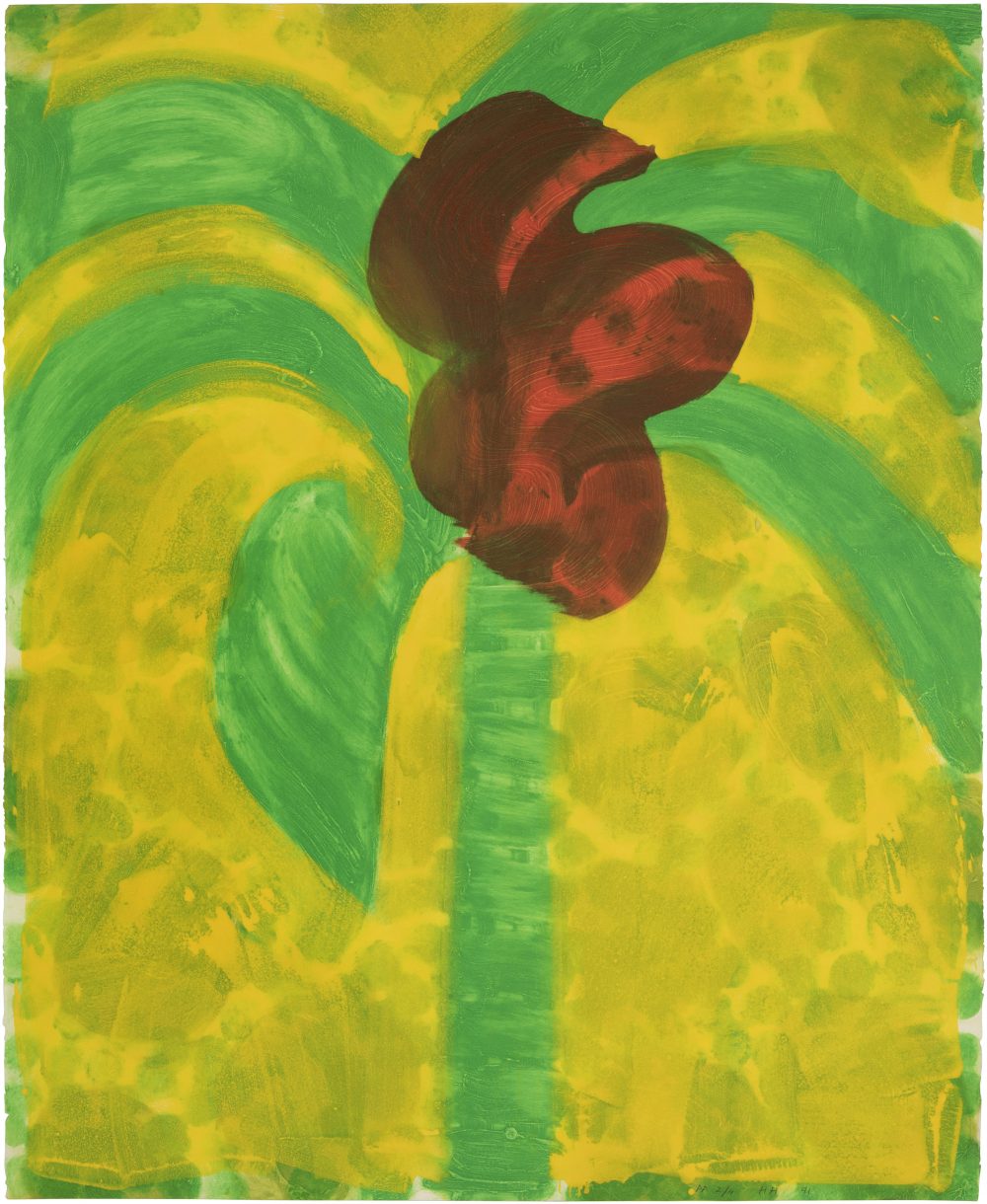 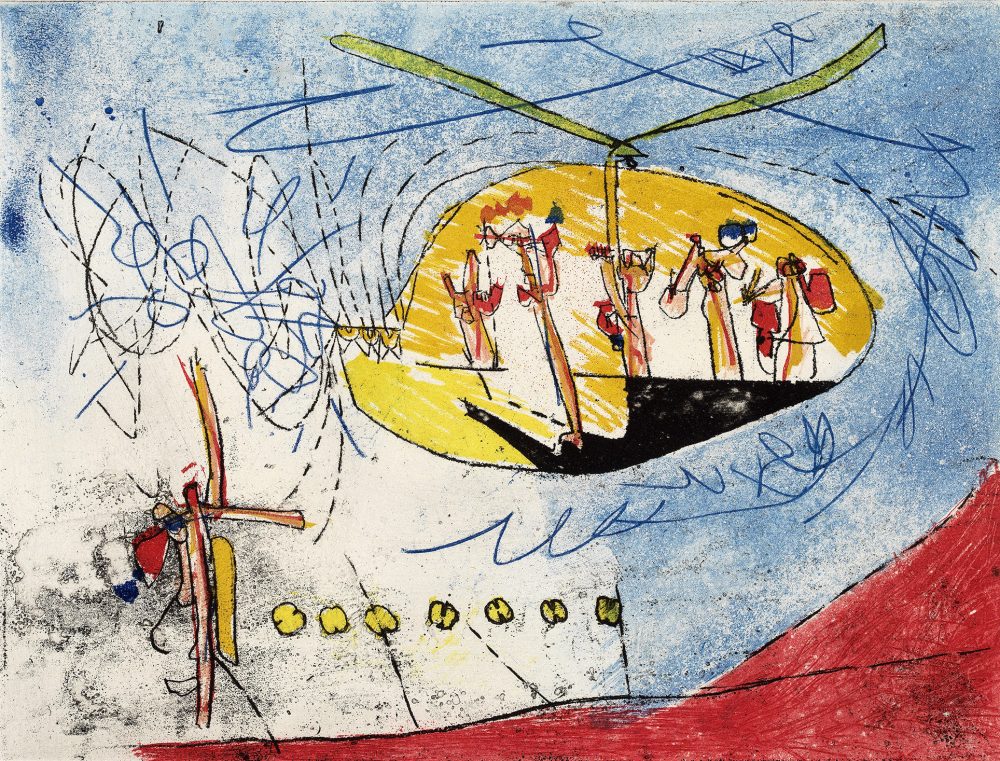