Sims Reed Gallery is thrilled to present the works of renowned graphic designer and acclaimed contemporary artist Paula Scher. Following on from several hugely successful exhibitions in the USA, this is Scher’s first solo presentation in London. The exhibition presents Scher’s iconic series of silk-screen maps published by Art Novel in 2018 as well as earlier maps that illustrate the artist’s ongoing obsession with mapping data across the globe.

Humming with colour and information, Paula Scher’s typographic maps of the world delight, challenge and stimulate her audience. She creates intricate, yet bold visions of an interconnected world that question our reality and ability to process data. The thick layers of ink render mind-bending patterns saturated with names, distances, postcodes; seemingly accurate, but ultimately steeped in subjectivity.

Scher’s fixation with mapping and data goes back to the 1950’s when her father, Marvin Scher, worked as a civil engineer for the U.S. Geological Survey. Troubled by the inaccuracy in aerial photography, he invented a measuring device that made camera lenses capable of correcting distortions that occur when aerial photography is enlarged. Fueled by this early interest, and also as a reaction to the complete digitization of her graphic design work, Scher has been making these painstaking portraits of contemporary information in paint and in print for over twenty years.

Expressive in their execution, yet with one foot firmly in the realm of the infographic, Scher’s distorted and impressionistic depictions of maps are a feast for the eyes and the mind.

For the press release or a full list of works please check back soon or email us. 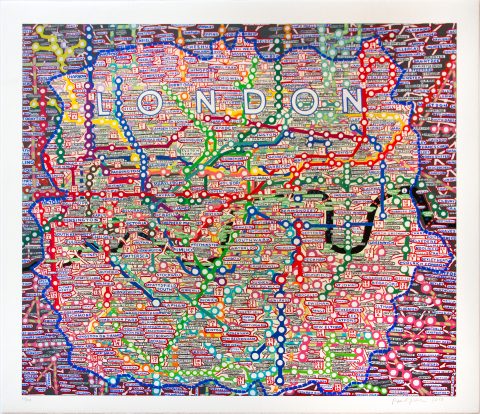 When the founder of ARTContent Editions Limited, (Now ArtNovel) Frans Wynans, discussed a possible commission with artist Paula Scher, he suggested that it would be interesting to consider maps where artists whom they admired had lived or had spent meaningful time. Together, Wynans and Scher decided on six editions from which London is one, chosen for the home of the British POP Artist Sir Peter Blake, who Wynans commissioned in 2005 to create the “Homage to Schwitters” series.

For information on upcoming exhibitions and gallery news, please sign up to our newsletter here.