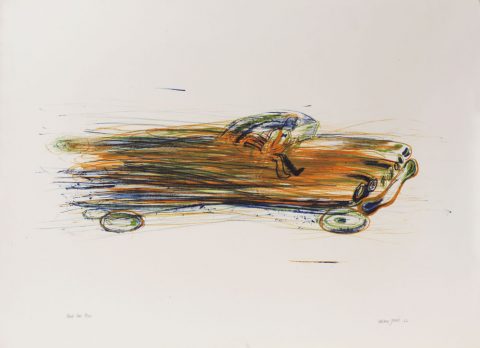 Sims Reed is pleased to announce the exhibition Cross-Currents: Post-War Books, Prints & Multiples. Major exponents of conceptual, abstract, performance and minimalist art are here brought together, drawing on the international patterns of artistic exchange and collaboration in the post-war era.

The catalogue opens with Marcel Duchamp’s La Boîte-en-valise. This highly significant work by a French émigré who challenged long-held assumptions about what was considered art, paving the way for conceptual practices, is a fitting starting point for our exhibition. The migration of many artists, such as Duchamp, to the USA, also marked the gradual decline of Paris as an artistic centre. By the end of the Second World War attention was largely focussed on New York.

Cross-Atlantic artistic exchange is exemplified by David Hockney’s visit to the USA in 1961. This marked for him a prolific period of printmaking that was inspired by the libertarianism of America, encapsulated in My Bonnie Lies Over the Ocean. British pop contemporaries, historically over-shadowed by their American counterparts, are also well represented in the exhibition with prints by Gerald Laing, Allen Jones, Richard Hamilton and Patrick Caulfield (whom Hamilton introduced to the screenprint medium). Roy Lichtenstein’s Brushstrokes illustrates how the commercial technique of screenprinting was well adopted for pop’s vivid imagery, which here makes an ironic nod to Abstract Expressionism. ‘Op’ artists, such as Bridget Riley (Nineteen Greys, Large Fragment), soon recognised the suitability of screenprint’s unmodulated surface for work that required clarity of outline and striking colour-blocks for its enquiry into visual perception.

Riley’s cool non-objective language is complemented by the prints and portfolios of Sol LeWitt, American pioneer of conceptualism and minimalism, which is in turn illustrated by American contemporaries Donald Judd and Fred Sandback. Sol LeWitt explored the democratic medium of print and expanded the field of artist books and multiples alongside Ed Ruscha (Insects) during the 1960s and 70s. French artist Daniel Buren worked within LeWitt’s conceptual minimalist framework. His signature stripes (Passage), installed in locations, which circumvent the conventional gallery context for art, also serve to challenge our increasing appetite for novelty. 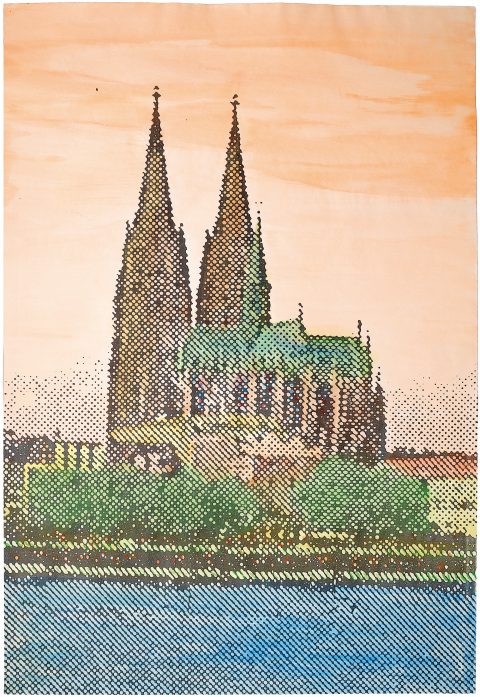 The collecting and use of mass-produced printed images and ephemera is a common strand among the artists included in the exhibition. German artist Hans-Peter Feldmann collects in order to appropriate and challenge aesthetic sensibility, Richard Hamilton’s use of pre-existing photographic imagery is linked with pop’s consumerist strategies, and Dieter Roth, German-Swiss conceptual artist and long time collaborator with Hamilton, alighted most particularly (nay obsessively) on the postcard format, exemplified in Postkarte. Roth also shared with Joseph Beuys the use of organic materials; where fat and grease in Beuys’s work is imbued with symbolism (its power to heal, societal transformation), Roth’s own motivations for using substances such as cheese or chocolate are in part due to their gradual decay, transformation and iconoclastic potential. Beuys’s involvement in Fluxism, the conflation of art and life, provides further ties with Japanese artist Ay-O, whose Finger Box Suitcase invites the viewer to poke their finger through various wooden boxes to feel the mysterious – perhaps disturbing – contents.

The human body as subject matter became increasingly scandalous and provocative in the post-war climate, whether in Hans Bellmer’s dark surrealist masterpiece Les Jeux de la Poupée, Allen Jones’s typically fetishistic Waitress I, or for the body’s new role as a medium of experience, object of analysis, and tool of social protest through performance, seen in the Aktionism of Gunther Brus (Patent Merde). American artist Bruce Nauman also explored the body, and his inclusion here alongside fellow-performance artists Gilbert & George highlights their shared deployment of language as material, often to absurdist ends.

The catalogue ends with Barcelona – a late print by the Catalan artist Joan Miró (L’Etranglé) and a work by French-conceptualist Christian Boltanski (Notícies del dia), which shows a plan of the city marked with crosses where police incidents occurred over a few days. The pairing characterises how divergent attitudes to making art had become in the latter half of the twentieth century, and how attempts to map the seemingly disparate artistic trajectories can reap revealing parallels in artistic thought.