Sims Reed Gallery are proud to present this major survey of graphic works by American Conceptual artist Sol LeWitt. This show charts LeWitt’s dedication to printmaking throughout his career in an exhibition of stunningly visual, colourful works. 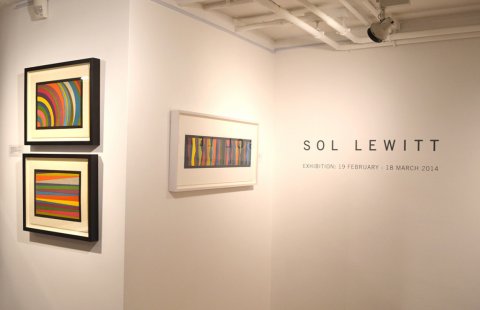 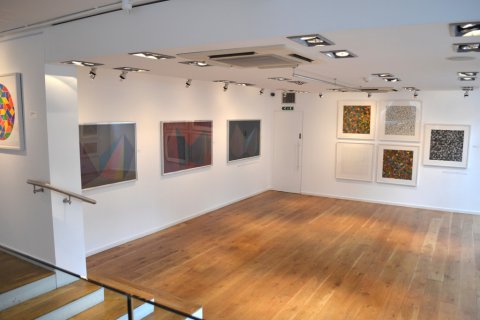 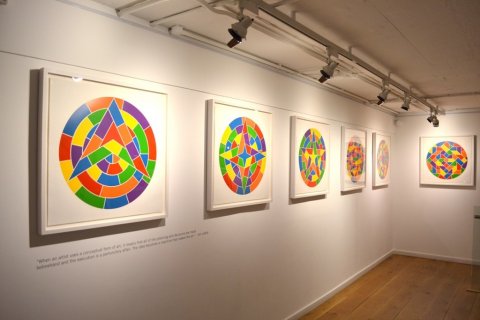 “The idea becomes the machine that makes the art.” – Sol LeWitt ‘Paragraphs on Conceptual Art’ (1967).

Sol LeWitt’s work is about ideas. These ideas are often presented to us in images and structures that are stunningly visual, colourful, graphic, even playful, but these qualities are by products of rigorous systems and specific investigations. For LeWitt, the idea was always his pre-eminent concern.

Solomon LeWitt was born in Hartford, Connecticut in 1928. As a young boy he took art classes at Wadsworth Athenaeum and later studied art at Syracuse University. In 1953 he moved to New York and during his early years there he studied at the School of Visual Arts and worked briefly as a graphic designer for the then fledgling architect I.M. Pei.

In 1960 LeWitt took a job as a night clerk at the Museum of Modern Art, which had a major influence on his career. It was here that he met and worked with Dan Flavin, Robert Ryman, Robert Mangold, and Lucy Lippard. They worked at MOMA at the same time as the 16 American Exhibition. This show had a profound effect on LeWitt and introduced him to the groundbreaking work of Frank Stella, Ellsworth Kelly, Jasper Johns, and Robert Rauschenberg.

Another major early influence on LeWitt was the work of 19th century photographer Eadweard Muybridge. The serial nature of Muybridge’s investigations into movement and his detached, almost clinical approach, would both become defining aspects of LeWitt’s own work. It was during the 1960’s that LeWitt began to define his specific style of Conceptual art – first in 1967, with the publication of his seminal text ‘Paragraphs on Conceptual Art’ and in 1969 with ‘Sentences on Conceptual Art’. In 1968, LeWitt executed his fist wall drawing at the Paula Cooper Gallery. 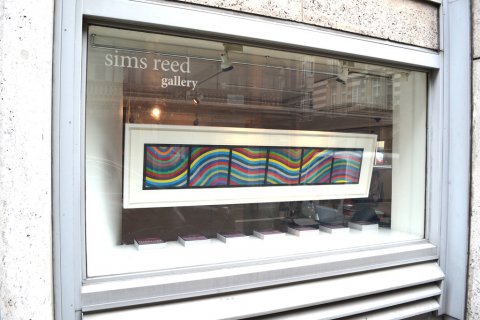 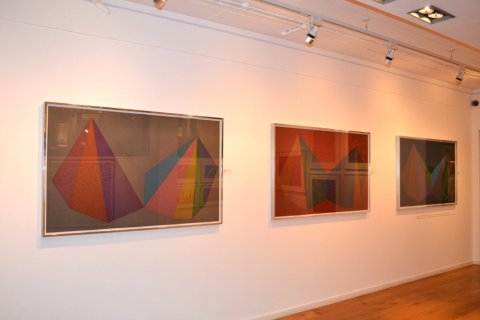 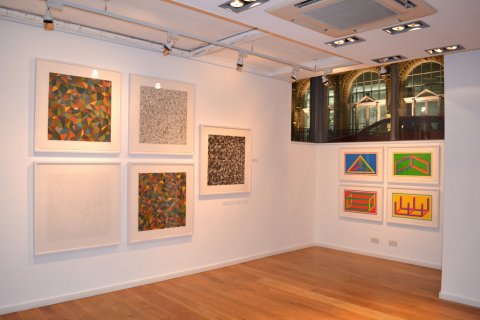 The basis for LeWitt’s work was formed by ideas rather then expression. Abstract Expressionists like Pollock and De Kooning had dominated the New York art scene for some time, but by the 1960’s artists were actively looking for a visual language that set itself apart from this very personal, subjective style. LeWitt’s work was concerned with objective concepts rather then the vagueness of emotion. He also completely avoided the cult of personality, which surrounded the Abstract Expressionists. Instead, he famously shied away from being photographed, explaining that he wanted people to focus only on the art itself and not on the artist.

LeWitt’s earliest works were typically sets of instructions, which when drawn created rigorous, geometric series. These works were careful and specific, purposefully avoiding any arbitrary or subjective mark making. The two earliest sets included here – ‘Straight Lines in Four Directions & All Their Possible Combinations’ (1973) and ‘Locations of Lines’ (1976) both typify this methodical approach. Like so often in LeWitt’s prints, the titles declare the rules by which the images are made. LeWitt also restricted his use of colour to combinations of yellow, blue, red, and grey – a technique he shared with commercial printing. Series such as ‘Four-Part Combination of Six Geometric Figures in Four Colors’ (1980) clearly illustrated this restrained pallete.

The end of the 1970’s and the beginning of the following decade marked a period of intense change for LeWitt. In 1978, MOMA held a major retrospective of his work. The museum’s press release for this exhibition, describes LeWitt as ‘An artist who was a pioneer figure of the Minimalist movement of the 1960’s and whose work has had a profound influence on Conceptual and post-Conceptual artists.’ It is interesting to note that he was given a MOMA retrospective relatively early in is his career and that it is clear from this press release that the profound influence he would have on later generations was already recognised. 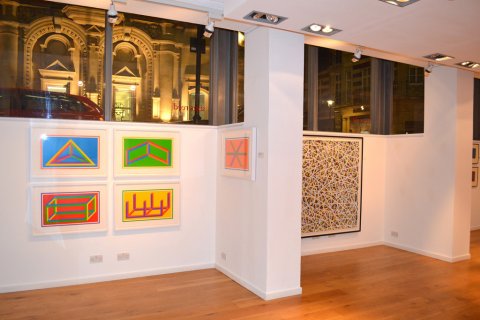 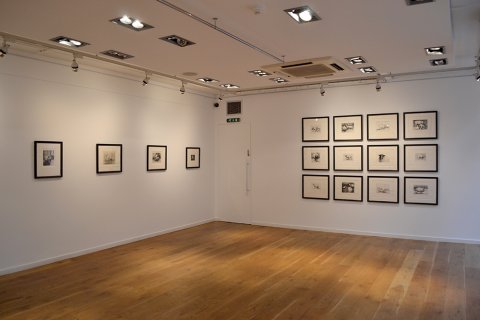 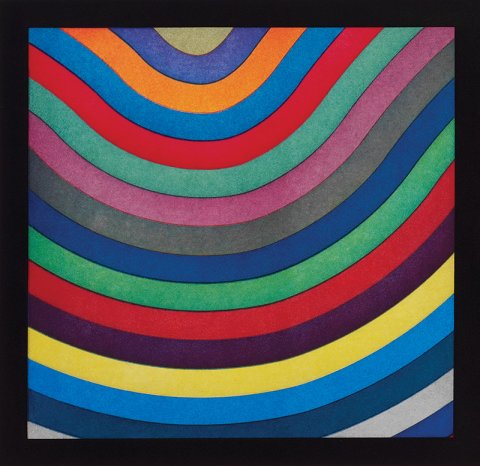 In 1980, shortly after the MOMA show, he moved to Spoleto, Italy (where he lived for six years) and was married, in 1982, to Carol Androccio. During this time, and perhaps as a consequence of these major events, LeWitt’s art begins to open up. He moves beyond lines and squares, and other geometric forms start to appear. Most notably perhaps in his graphic work is the appearance of pyramidal forms. Examples of the large-scale ‘Two Asymmetrical Pyramids’ series (1986) and the smaller, but equally beautiful aquatint ‘Pyramids’ series (1987) are both included in this exhibition. In 1988 LeWitt installed a monumental wall drawing in the Italian Pavilion at the Venice Biennale – ‘Wall drawing #564: Complex Forms With Color Ink Washes Superimposed’. By this point, the individual triangles and pyramids that appear earlier became large complex amalgamations. In typical LeWitt fashion, these shapes were plainly called Complex Forms. These investigations were played out in his graphic work as well, most impressively in the series of five large etchings, ‘Complex Forms’ (1990).

Through the next decade, his work continues to concern itself with form and colour – the colours becoming increasingly vibrant and the forms looser. In prints such as ‘Irregular Zigzag Bands’ (1996), ‘Concentric Irregular Bands’ (1997) and ‘Curved Bands’ (1997) LeWitt moves even farther from the rigorous order and restrained colours that typified his earlier work. The word ‘Irregular’ begins to appear more often in the titles and the work seems to be on the brink of some impending change. This change comes in 1998, in a print project LeWitt agreed to do for Lincoln Center. This print, almost by chance, became the springboard for enormous changes in his work. In an interview a few years after the commission, LeWitt explained- ‘I was asked to do a poster for Lincoln Center. I decided to do something that was completely different, a one-time thing…I started using curved lines and bright colours, everything that was completely different from what I was doing then…I liked the way the poster came out so I kept after it. That turned into what I’m doing now and a new way of thinking.’ This new way of thinking was executed in several of his prints from 1998 until he passed away in 2007. The bold saturated colours and solid, irregular forms first used in the Lincoln Center print, appear again soon after in works including ‘Irregular Arcs Bands and Loops’ (1999), ‘Colors Divided by Wavy Lines’ (1999), ‘Arcs and Bands in Color’ (2000). The rich colour and clean lines of linocut and screenprinting become LeWitt’s preferred mediums for executing these glossy, impenetrable surfaces.

Through the course of his career, LeWitt used every medium available to him to explore and execute his vision, and prints were essential to this. By its very nature, printmaking offered a more efficient way of making several permutations of an idea and also allowed for more precision than drawing could. Indeed a survey of LeWitt’s prints shows the progression of his art and ideas perhaps more fully then any other single medium.