Sims Reed Gallery is delighted to  present Bruce Nauman Prints 1970 –  2006 in collaboration with Galerie Ronny Van de Velde. The exhibition will include around 30 prints and will run from 24 June – 17 July 2015. Bruce Nauman is one of the most prominent and influential artists to emerge from America in the 1960s. His work has consistently been at the forefront of contemporary art and continues to challenge convention, even today.

Nauman’s work avoids categorisation through its diversity – sculpture, installation, video, performance and printmaking have all formed part of his oeuvre. The philosophical issues of language, perception, and human experience preside over any stylistic concerns. The work is confrontational and disorientating, forcing us to engage with it physically, emotionally and mentally. His varied use of media reflects the complexity of human experience, whether through his all-encompassing video projections and sound installations, his vivid neon signs, or the direct and aggressive visual statements of his text-based prints.

Nauman had begun to use words in his work from the 1960s in the form of photography and sculpture, and by the 1970s, printmaking became central to his exploration of language. The nature of printmaking allowed Nauman to experiment with reversal, mirroring and repetition of words. It proved to be an increasingly important medium, marrying successfully with his interest in word play. Malice (1980) depicts the word malice forwards and backwards. Our association with the word evokes unease, however, its meaning is simultaneously voided when reversed, creating confusion in our reading of the work. This deconstruction of language forces us to re-evaluate its function, separating meaning and appearance. AH HA (1975) not only uses mirroring and reversal to deconstruct words, but it also resonates aurally with the viewer in the repetitious vowel sounds. Nauman explains – ‘I am really interested in the different ways that language functions. That is something I think a lot about, which also raises questions about how the brain and the mind work… the point where language starts to break down as a useful tool for communication is the same edge where poetry or art occurs. 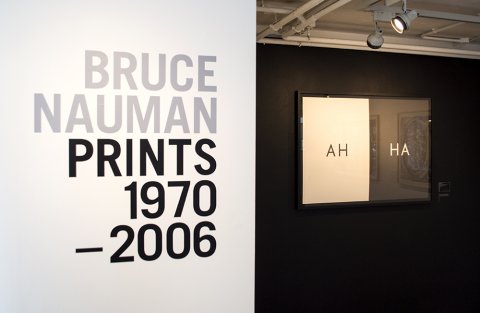 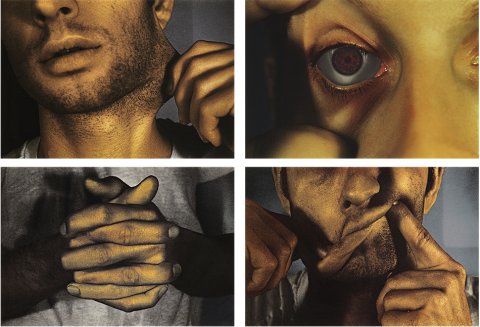 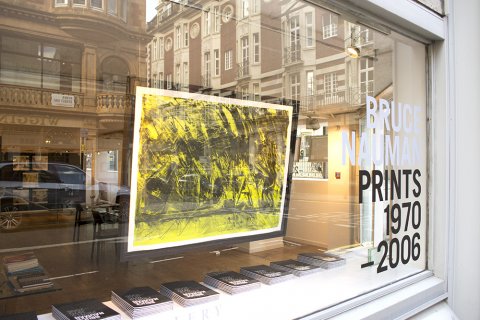 In lithography, Nauman found that the directness of mark-making on the stone mimicked drawing; and this appealed to him. Conversely, he also enjoyed the sense of removal that resulted from the intaglio printmaking process. Suck Cuts (1973) is an example of how clarity can be achieved in lithography, in a way that conveys his statement with great precision. In contrast, the expressive imagery of No (1981) reveals a different approach to the medium. The marks have a fury and energy that shout the statement at the viewer.

Nauman has had a long fascination with the philosopher Ludwig Wittgenstein; whose book Philosophical Investigations was a source of great importance and inspiration for his own practice. Wittgenstein explores the gap between language and sensation, highlighting how language as a system fails to portray perception and subjective experience. Many of Nauman’s works take this principle as their basis. Perfect Door, Perfect Odor, and Perfect Rodo (1973) explore the variable concept of perfection. The work plays on the inappropriate juxtaposition of the word ‘perfect’ with the words ‘odor’ and ‘door’, and further, the absurdity of the statement ‘perfect rodo’. At the centre of this, is the way in which the viewer experiences the works, through the inevitable associations we make when we read language. These works through the simple re-arrangement of letters, show how language can be easily manipulated, and in doing so how meaning can be dramatically altered, changing our experience of it. As Nauman describes – ‘Roland Barthes has written about the pleasure that is derived from reading when what is known rubs up against what is unknown, or when correct grammar rubs up against non-grammar… When language begins to break down a little bit, it becomes exciting and communicates in nearly the simplest way that it can function: you are forced to be aware of the sounds and the poetic parts of words.’ 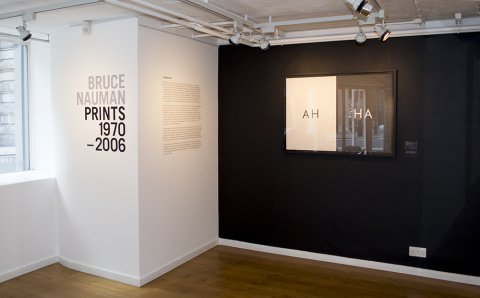 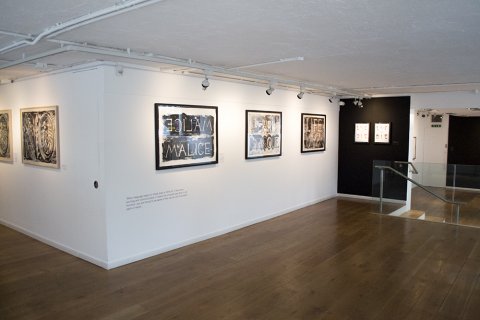 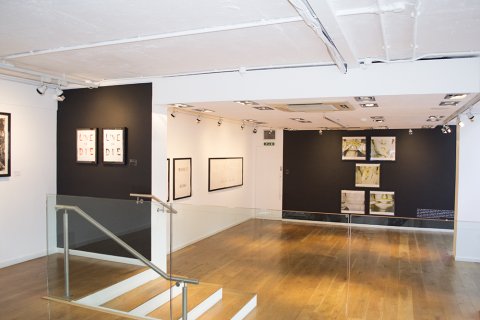 Nauman has used his own body as a medium throughout his career, from his earliest video performance pieces, such as Walking in an Exaggerated Manner Around the Perimeter of a Square (1967-8), where repetitive, mundane tasks were acted out in his studio. Nauman’s objectification of his own body challenged the conventional role of the artist. His first print series Studies for Holograms (a-e) (1970) was conceptually rooted in earlier performance pieces and directly linked to a series of photographs taken in 1968. Five works were selected for this later group of screenprints, which focus on the lower half of his face. In isolation, his facial features appear as abstract entities, where flesh becomes a mouldable material. The eerie yellow hue of these works accentuates the disconnection from the human body. In these works, and in the later series Infrared Outtakes (2006) Nauman was fascinated by how arbitrary actions or expressions would resonate with the viewer, in a different way to how we respond to works that deal with language and all the associations it holds. 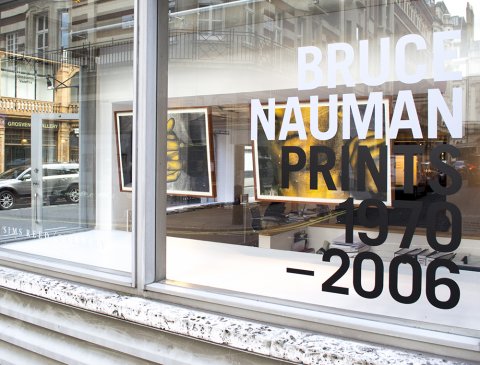 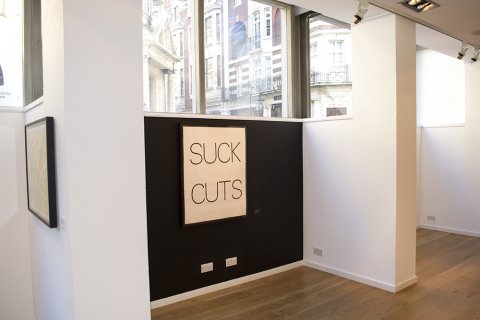 Clown Taking a Shit (1988) represents another aspect of Nauman’s work, addressing issues of identity, and masking. This piece returns to his seminal video installation Clown Torture (1987) which dealt with issues of frustration, failure, threat and in a broader sense, the human condition. This piece was important in its pervasive creation of tension and anxiety for the viewer, calling into question our role as voyeur, as well as victim. He plays on our associations with clowns and their comic role, coupled with the threatening nature of their disguise. Tension and ambiguity, in this case represented by the clown, is present throughout Nauman’s work.

Nauman constantly throws the conventional role of the viewer into question, and forces us to react. Nauman himself explained ‘From the beginning I was trying to see if I could make art that did that. Art that was just there all at once. Like getting hit in the face with a baseball bat. Or better yet, like getting hit in the back of the neck. You never see it coming; it just knocks you down. I like that idea very much: the kind of intensity that doesn’t give you any trace of whether you’re going to like it or not’. This survey of Nauman’s prints shows the depth of his involvement in printmaking as well as the use of different techniques to rigorously explore language and human experience. It reveals printmaking as an essential part of his diverse practice, and shows the thematic overlap with his work across other mediums. Nauman’s prints are insistent, provocative and form a crucial part of his oeuvre.