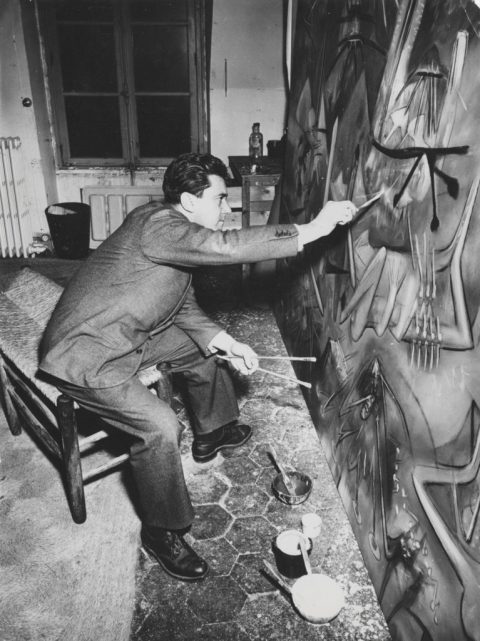 Roberto Matta in his studio, Paris, circa 1956.

The work of Roberto Matta (1911-2002), much like that of his friend Arshile Gorky, functions as a bridge between Surrealism and Abstract Expressionism, and between the European avant-garde and its American counterpart in 20th century Modernism.

Born Roberto Sebastián Antonio Matta Echaurran in 1911 in Santiago, Chile, Matta studied architecture and interior design at the Pontificia Universidad Católica de Chile. He followed his studies with travel across Europe and the United States, where he met crucial artists and thinkers of the period including René Magritte, Salvador Dalí, André Breton and Le Corbusier. He experimented with the processes of automatism, and produced works of rich colour and loose brushstrokes that laid biomorphic shapes over the architectonic forms, references to his architectural education. He settled in New York and began to work alongside Gorky, until Matta had an affair with Agnes Magruder, Gorky’s wife. The artist group accused Matta of indirectly contributing to Gorky’s suicide and expelled him; Matta then returned to Europe and spent much of the 1950s and 60s in South America, supporting the socialist government of president Allende in Chile. He expanded his canvases, subjects and media, working with murals, ceramics, photography and film to produce abstract works of politically engaged, pro-socialist surrealism.

After his first retrospective at the Museum of Modern Art, New York, in 1957, retrospectives at the Centre Pompidou, Paris, and the Reina Sofia, Madrid, followed in 1985 and 1999, respectively. The San Diego Museum of Art exhibited Matta’s work with that of his son, Gordon Matta-Clark in a father-son exhibition in 2006.