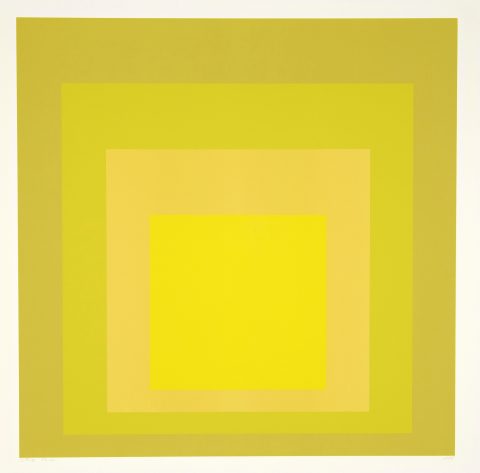 Josef Albers was an American-German artist and educator best known for his iconic colour square paintings—the Homage to the Square series. These works along with his writings, which formed the basis of modern art education programs of the twentieth century, are considered invaluable contributions to colour theory. “Simultaneous contrast is not just a curious optical phenomenon—it is the very heart of painting,” Albers once explained of colour relationships:

“Repeated experiments with adjacent colours will show that any ground subtracts its own hue from the colours which it carries and therefore influences.” 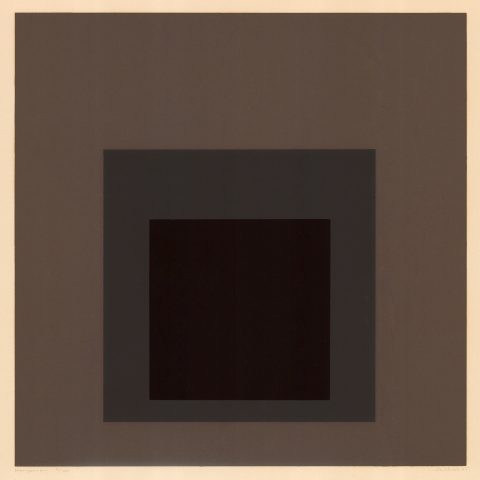 Born on March 19, 1888 in Bottrop, Germany, he was a student of the famed colourist Johannes Itten at the Bauhaus in Weimar. Joining the Bauhaus in 1922 as a stained glass maker, he later became a professor at the Dessau location of the school in 1925. It was during this time that Albers took over Itten’s course and co-taught with László Moholy-Nagy, alongside other members of the faculty Paul Klee and Wassily Kandinksy.

Emigrating to the United States after the Nazi regime closed the Bauhaus school in 1933, Phillip Johnson a curator at The Museum of Modern Art found positions for both Albers and his wife Anni Albers at the experimental Black Mountain College in North Carolina. He served as the head of the painting program at the school from 1939–1949, teaching Cy Twombly and Robert Rauschenberg among others. After his time at Black Mountain College, Albers became the head of the design program at Yale University during the 1950s.

Published in 1963, his book Interaction of Color remains one of the most influential texts used in contemporary arts education. His development of Modernist aesthetics for which he became synonymous are at the helm of his artistic oeuvre and ‘Homage to the Square’ presented the square as the ideal vehicle for his explorations into colour. He soon came to depend on the liberating medium of print as it allowed Albers to transform the elements of line, colour and space in his work, offering an evenness of clarity of colour unavailable in oil or acrylic.

Albers’s works are held in numerous collections including The Museum of Modern Art in New York, the Art Institute of Chicago, the National Gallery of Art in Washington, D.C., and the Tate Gallery in London.