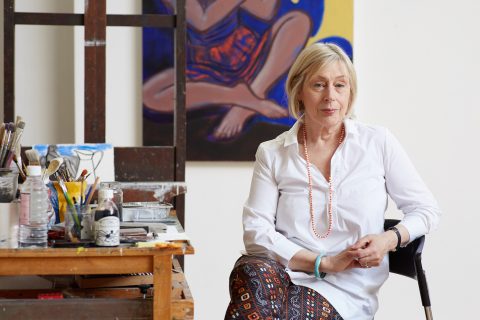 Eileen Cooper OBE RA (b. 1953) was born in Glossop, in the Derbyshire Peak District. She studied at Goldsmiths College from 1971—1974 being in the cohort of students who were selected by Jon Thompson. Senior members of staff at that time included Bert Irvin RA, Basil Beattie RA and Michael Craig Martin RA. She went on to study Painting at the Royal College of Art under Peter de Francia, graduating in 1977 and soon began to exhibit her work. During the 1980s she became a major figure, well known and regarded for her strong and passionate figuration. Cooper has always taught part time in numerous institutions including St Martins, Royal College of Art and the Royal Academy Schools. She became a Royal Academician in 2001 and served as Keeper of the Royal Academy of Arts between 2010 and 2017, making her the first woman in the history of the Academy to do so. She curated and coordinated the Summer Exhibition at the Royal Academy in 2017.

Her work is in collections including the British Museum, the Royal Collection, the Victoria and Albert Museum, London and the Arts Council of Great Britain. In 2019, Eileen exhibited at Sims Reed Gallery. View the 2019 exhibition catalogue of Short Stories here .