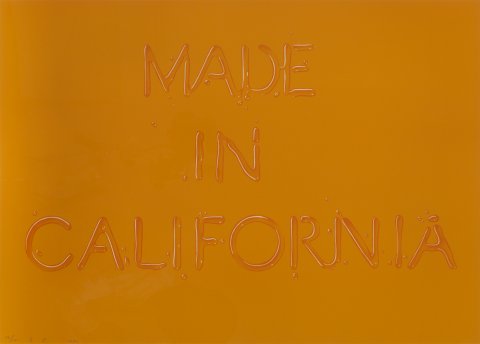 Made in California, 1971, screenprint in colours

Ed Ruscha is an American painter, photographer and printmaker who studied at the Chouinard Art Institute in Los Angeles where he currently lives and works. His works are often associated with Pop Art through his incorporation of words and images and synthesizing imagery from the real world and mass commercial culture. The characteristic graphic simplicity of his works and may have been influenced by his collection of old stamps for their printed quality and colour. Discussing his first foray into printmaking at Chouinard he said:

“I immediately liked the way it worked. The way the ink went on. The whole curious production of making a print…we would just make a proof and play with the thing, change it a little bit and make another proof.” 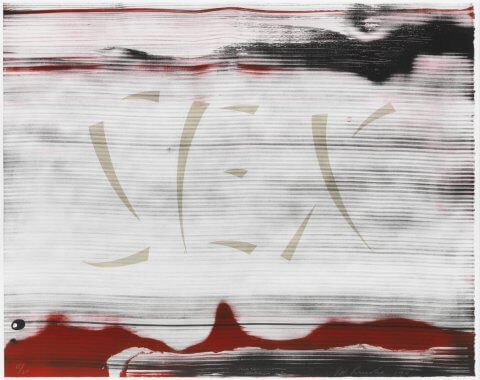 Photography is central to his oeuvre and often became source material for his prints either at the time or years later such as his images in photo book Twentysix Gasoline Stations (1963) that laid the ground for his iconic ‘Mocha Standard’ (1969). This depicts a gas station selling Standard oil; a familiar sight around America especially along Route 66 until they were later bought by Chevron. As typical of Pop Art, Ruscha takes the mundane or imagery from everyday commercial culture and manipulates them through isolation, cropping and dramatic perspective, which renders a striking diagonal across the paper together with the bold lettering of ‘Standard’. This work is part of a series finished in different colours yet from the same screen and same size.

Often Ruscha’s work feature the addition of colloquial words on top of fields of colour or patterns such as ‘honk’, ‘oof’ or ‘smash’ as seen in ‘Sex’ (1991) or imagery derived from his photography. Talking on his incorporation of word and image, he said:

“I like the idea of a word becoming a picture, almost leaving its body, then coming back and becoming a word again.” 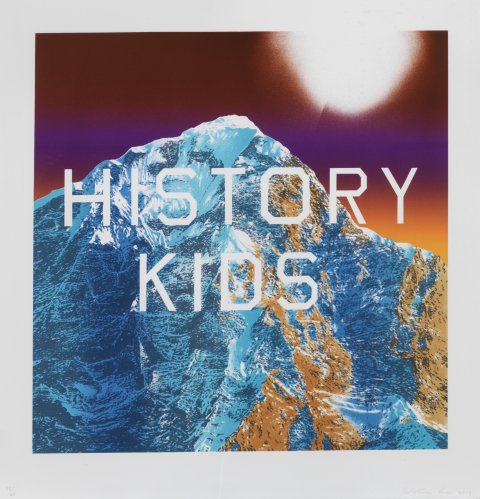 Exhibitions of Ruscha’s work have been held at prominent museums and galleries worldwide including The San Francisco Museum of Modern Art (1982-3), The Whitney Museum of America Art (2004), The Tate Modern London (2009), the J. Paul Getty Museum, Los Angeles (2013) and the Fine Arts Museums of San Francisco (2016).