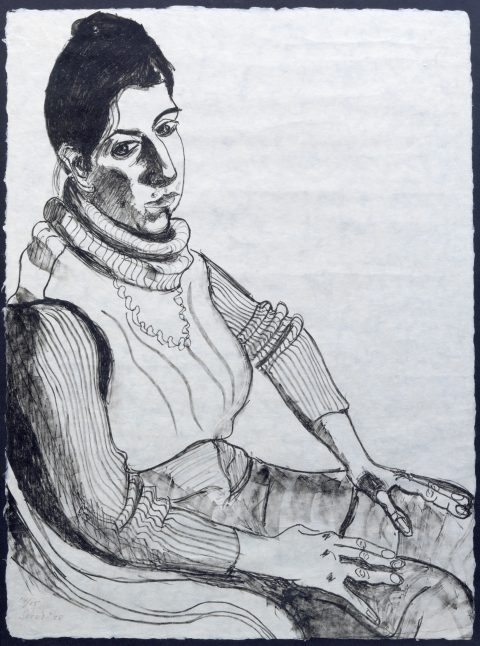 Alice Neel was an American visual artist and one of the great portraitists of the 20th Century, with her starkly honest paintings and prints of relatives, lovers, friends and neighbours. Her work rendered an expressionistic use of line and colour coupled with emotional intensity. Considered by some as one of the greatest portrait artists of the 20th Century, Neel used distorted drawing and invented colour to reveal the character beneath each sitter’s physical appearance. Despite working in obscurity for most of her career, during the last two decades of her life, she gained increasing recognition and her later paintings include portraits of celebrated figures including Andy Warhol and John I.H.Baur. One of her guiding principles as a portraitist was, in her own words, that:

‘every person is a new universe unique with its own laws’.

The first exhibition dedicated to Neel’s works in Europe was held in London in 2004 at the Victoria Miro Gallery. Jeremy Lewison, who had worked at the Tate, was the curator of the collection. In 2001 the Philadelphia Museum of Art organised a retrospective of her art entitled Alice Neel. She was the subject of a retrospective entitled Alice Neel: Painted Truths organized by the Museum of Fine Arts, Houston in Texas, which was on view from March 21 to June 15, 2010 The exhibition travelled to Whitechapel Gallery, London, and Moderna Museet Malmö, Malmö, Sweden.  In 2013, the first major presentation of the artist’s watercolors and drawings was on view at Nordiska Akvarellmuseet in Skärhamn, Sweden. Moore College of Art hosted a solo exhibition of alumna Neel’s work in 1971.

Neel’s work is held in many important collections including The Art Institute of Chicago, Metropolitan Museum of Art, New York and National Gallery of Art, Washington.