It is hard to believe that until now, there has never been a show in the UK devoted to Jane Hammond’s work. Over the course of her thirty-year career, she has had numerous solo shows in America and abroad. She is represented in every major American museum, and there is a substantial body of literature written on her work. Certainly, there are very few artists who can boast an equally impressive resumé. Our one challenge in presenting her first UK solo exhibition was to find a coherent way to show an artist whose vision is infinitely broad and whose working practice is so diverse. 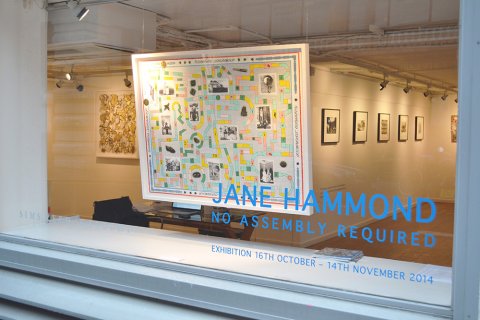 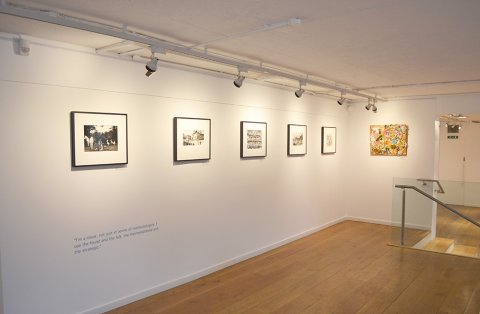 Although the techniques vary widely, from watercolour and drawing, to etching, digital printing, and photography, the use of paper is consistent throughout the exhibition and is a major component of Hammond’s work generally. Another aspect all the works here have in common is the use of collage and assemblage, which is how we arrived at our title ‘No Assembly Required’. Although the pieces may appear quite different at first glance, they all share Hammond’s eccentric, more-is-more character. In each case, she has taken varied and seemingly incongruent elements, which she then tirelessly remakes, reworks and recombines into something dazzling and wholly new.

Hammond is by nature a collector and is constantly exploring the world around her looking for material to incorporate into her pictures. At its core, this work is fundamentally about information and its relationship to consciousness, and Hammond has always used found images to create layers of meaning and new narratives. The foundation of her visual vocabulary is a lexicon of 276 images, which she assembled in 1988. These come from every manner of printed material including books, manuals, scientific texts, cartoons, stamps, tarot cards, and even tattoos. The subjects cover all disciplines and range from a pair of dice to a portrait of Frida Kahlo. They are remade each time they are used – their medium, colour, scale, and relationship to each other change constantly – but fundamentally these are the building blocks for all of Hammond’s work.

Most clearly delineated in the matchbook works and gampi piece, a selection of these images are transformed into rubber stamps, printed in etching ink, watercoloured by the artist and assembled three-dimensionally. They are given notational titles (each named after the image in the upper left corner), and it is left to us to make our own associations and connections. Although some characters appear in all three works, their purpose in each can be completely different. Picasso for instance may be in one because he is an artist, in another because he is yellow, and in another because of his round head.

The centrepiece of this show is the stunning ‘All Souls (Canterbury)’. This is the newest work in a series of butterfly maps that have become an important part of Hammond’s oeuvre and exemplify her ingenious approach to working with paper. The idea came to her in a dream, following an auspicious event on the afternoon of September 11, 2001. Amidst the horror and chaos, a flock of Monarch butterflies appeared on the flower boxes outside the windows of her south-facing Soho loft. This had never happened before or since. The delicate butterflies and the fragility of life clearly resonate and these maps are a metaphor for the endless cycles of human life in ancient lands. Butterflies are also a good example of how a subject can be molded and changed – while featuring prominently in ‘All Souls (Canterbury)’, they also appear as a singular collage element in ‘Scrapbook’, as a printed swarm amongst the layers in ‘Bulletin Board (Water Tulip)’, and as likely characters in the botanical collages.

In other works, Hammond’s lexicon is still present, but the images are combined in a more layered, almost frenzied, fashion. The two glittering ‘Tapestry of Daily Life’ pieces present a contrast between the everyday objects depicted and their opulent, golden hues. Interspersed amongst the cacophony of colour in ‘Bulletin Board’, are pairs of similar objects that our eye wanders between. All newly conceived for this exhibition, these present a maze of familiar objects, painstakingly remade in paper, that call upon the viewer to sift through and make their own associations. 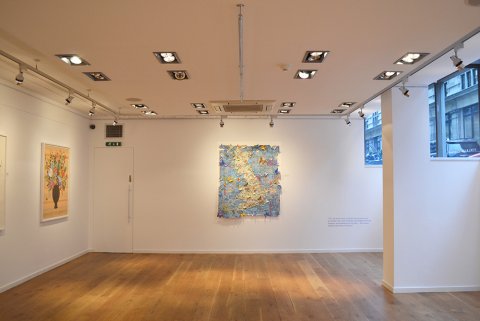 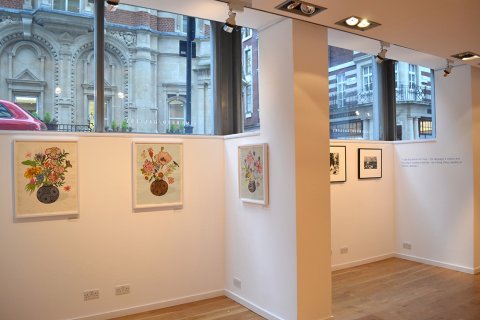 Collage is also fundamental to the botanical works. In these, the apparent randomness seen elsewhere is given structure in the form of traditional flower arrangements, which are bursting with flowers gathered from her bountiful supply of source material. Though of course, nothing by Hammond is as it seems and closer inspection uncovers animals, insects, and every manner of unlikely creature amidst the foliage. These at first may seem quite straight-forward, but soon reveal a much more complicated, ambiguous character.

Another prominent feature of this show is printmaking. In some cases, it may be how individual elements of a work were created. But in other cases, it is the work itself. ‘Tabula Rosa’, a life sized self-portrait seen from behind and covered in tattoo images from her original lexicon, is a very personal and poetic use of digital printmaking. As we would expect from Hammond, most of her editioned works employ several different techniques – ‘From the Goose to Girl’ and ‘Snapshot Odyssey’, both combine pochoir, relief printing, hand colouring, and lithography among others. These prints are also the most literal references to game playing and the notions of rules and chance, important ideas that occur throughout her work.

Most recently, Hammond has turned her foraging and remaking instincts to photography, which she began working with in 2004. Inherent in the nature of photography is the assumption of fact; Hammond intentionally uses a traditional silver gelatin process and keeps the image a familiar size, reinforcing their initial sense of verisimilitude. However, one soon realises that these pictures and their odd, implausible scenarios are not what they seem. Using her collection of over 15,000 vernacular photographs, along with both documentary and set-up photographs she takes herself, she excavates and creates the necessary components for her new vision. After painstakingly searching for the right details, they are manipulated, reassembled, re-scaled, shadowed, blurred, etc. A negative is made from the collaged, digital image, which is then printed as a silver gelatin print and finally presented as a new photograph. As in all her work, found facts are transformed into new fictions.

This is a show that defies easy categorisation, but Hammond is an artist that cannot be explained or defined with ease – she is at once systemic and chaotic, humorous and mysterious; full of endless possibilities. Engaging with her work is being invited to play her visual game, with infinite layers, ever shifting meanings, and the constant reward of surprise and wonder.