Link to exhibition catalogue | Link to virtual tour of exhibition 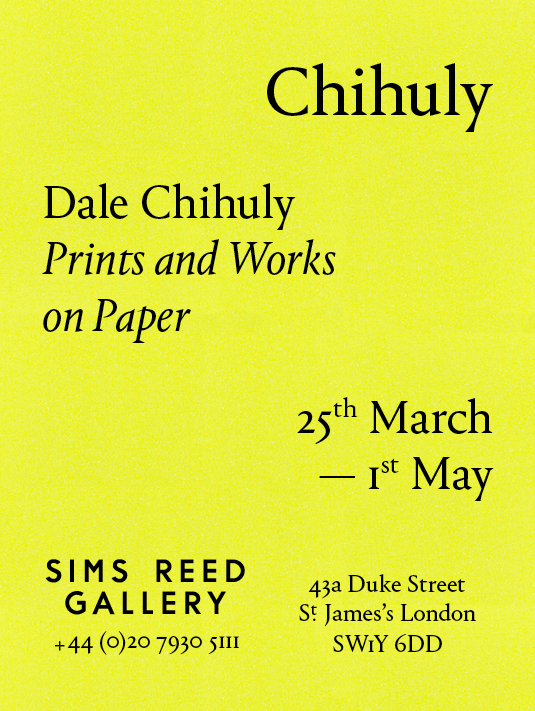 Sims Reed Gallery is delighted to present an exhibition of Fine Art prints and original works on paper by the internationally renowned American artist Dale Chihuly.

While celebrated for his exquisite and pioneering glass installations, drawing has always been integral to Chihuly’s artistic practice. They became an increasingly important means of communicating his ideas to his team after losing the sight of his left eye in 1976. These works evolved from charcoal and graphite studies into wilder colourful pieces, that according to the artist remain a crucial part of his creative process, without which the glass works would not have progressed in the way or at the speed with which they have. He describes the exchange of energy between the two as a flow of ideas, commenting that ‘drawing is a fluid process,’ like the blowing of glass.

This exhibition, which is comprised of twenty-nine original prints and ten original works on paper, seeks to reveal the elision of these two disciplines. Some of the prints — a medium the artist has been exploring for almost 30 years — draw on his sculptural series, such as Baskets, Niijima Floats, and Venetians, for inspiration, while others are purely imaginative.

As Chihuly has said, ‘sometimes the drawings would be about the glass; sometimes they’d just be drawings, a way to release the energy, or a way for my mind and body to be creative while the glassblowing was going on.’

The featured prints range from woodcuts, hand-coloured screenprints and lithographs, as well as many embellishments incorporated into the production of each. Says the artist, ‘I want people to be overwhelmed with light and colour in some way they’ve never experienced.’ These qualities, along with his two other guiding principles, asymmetry and irregularity, can be witnessed in the displayed works. For example, Echo Floats (2018), is formed of two swirling daffodil-yellow and iridescent violet spheres with speckled centres set against a spring green background. A work of exceptional beauty, it also mirrors the grand, spherical form and blended-color surfaces found in the artist’s acclaimed Niijima Float series, which he commenced in 1991.

Also included in the show are ten original works. The earliest of these, Venetian Drawing (1990), captures the immediacy of his astonishing visual invention, with upswept thrusts of black charcoal suggestive of birds or flames, while evoking the exuberant forms achieved in the sculptural series from which its title is derived. In other original works presented, Chihuly’s dedication to experimentation is highlighted. His delight in stretching the limits of whatever media he works with is particularly evident in the Ikebana drawings (1998 and 2009), in which the artist employs an innovative technique of burning directly into the paper.

Max Reed, Gallery Director, says: ‘We are thrilled to be showing for the first time these prints and works on paper by Dale Chihuly, who over five decades has explored new and old techniques, pushing the boundaries of Contemporary Art to create works that transform the everyday experience. While he is globally and justly renowned for his installations and glass artwork, it is arguably on paper that these ideas initially emerge and are subsequently revisited, resulting in a creative collision that gives rise to astonishing works of beauty and depth.’