“When Matisse dies,” Pablo Picasso remarked in the 1950s, Chagall will be the only painter left who understands what colour really is”. 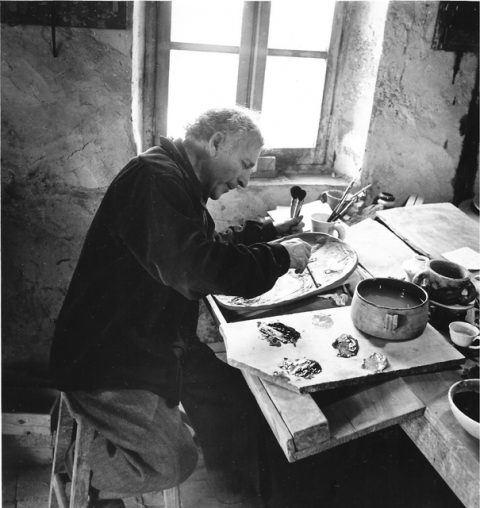 Philippe Halsman. Marc Chagall in his studio in Saint-Paul-de-Vence, 1960.

From 1907 to 1910 he studied in Saint Petersburg, at the Imperial Society for the Protection of the Arts, and later with Léon Bakst. In 1910 he moved to Paris, where he associated with Guillaume Apollinaire and Robert Delaunay and encountered Fauvism and Cubism. He participated in the Salon des Indépendants and the Salon d’Automne in 1912. His first solo show was held in 1914 at Der Sturm gallery in Berlin.

Chagall visited Russia in 1914 and was prevented from returning to Paris by the outbreak of war. He settled in Vitebsk, where he was appointed Commissar for Art in 1918. He founded the Vitebsk Popular Art School and directed it until disagreements with the Suprematists resulted in his resignation in 1920. He moved to Moscow and executed his first stage designs for the State Jewish Chamber Theater there. After a sojourn in Berlin, Chagall returned to Paris in 1923 and met Ambroise Vollard. His first retrospective took place in 1924 at the Galerie Barbazanges-Hodebert, Paris. During the 1930s he travelled to Palestine, the Netherlands, Spain, Poland, and Italy. In 1933 the Kunsthalle Basel held a major retrospective of his work.

During World War II Chagall fled to the United States. The Museum of Modern Art, New York, gave him a retrospective in 1946. He settled permanently in France in 1948 and exhibited in Paris, Amsterdam, and London. In 1951 he visited Israel and executed his first sculptures. The following year the artist travelled in Greece and Italy. During the 1960s Chagall continued to travel widely, often in association with large-scale commissions he received. Among these were windows for the synagogue of the Hadassah University Medical Centre, Jerusalem (installed in 1962); a ceiling for the Paris Opéra (installed in 1964); a window for the United Nations building, New York (installed in 1964); murals for the Metropolitan Opera House, New York (installed in 1967); and windows for the cathedral in Metz, France (installed in 1968). An exhibition of the artist’s work from 1967 to 1977 was held at the Musée du Louvre, Paris, in 1977–78, and a major retrospective was held at the Philadelphia Museum of Art in 1985. Chagall died in 1985 in Saint-Paul-de-Vence, France.